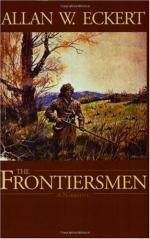 The Frontiersmen: A Narrative Summary & Study Guide includes comprehensive information and analysis to help you understand the book. This study guide contains the following sections:

This detailed literature summary also contains Topics for Discussion and a Free Quiz on The Frontiersmen: A Narrative by Allan W. Eckert.

Simon Kenton is born April 3, 1755. His mother wants to name him Benjamin, but his father announces that his name is Simon. The Indian named Tecumseh is born March 9, 1768, as a shooting star passes across the night sky. After this sign, his family's good fortune with regard to children will continue with the birth of triplet boys.

As a child, Simon Kenton simply refuses to work. People say he's incorrigible. He says he'd rather die than work. If he's whipped or forced to work, he'll do so only until his parents aren't watching, and then he runs away to the hills where he sometimes stays for days. He falls for a girl who leads him on and then marries another. Simon fights the young man twice. The first time he's whipped seriously, and the second time he beats the man so severely he believes he's dead. Simon runs away, fearing that he'll be tried for the murder if he remains. He makes his way to the frontier, quickly making a name for himself as a man who can handle himself in the woods. After making an incredible shot at a turkey, he meets a man named Bill Grills, who invites Simon to join his party for an expedition down the Ohio. Simon does but is soon left behind, though he's granted a share of the supplies—including traps. He sets out to learn all he can about the wilderness, connects with a man named John Yeager who promises he knows the way to a great hunting ground, and spends time in the land that will become known as Kentucky before Yeager is killed and Simon barely escapes.

Over the years, he becomes well known and often volunteers to lead settlers to a particular destination, or lends his gun to fight off Indians or chase down those who have killed or stolen from whites. He fathers an illegitimate son, then meets and marries a young woman named Martha Dowden, who bears Simon four children before her death. He then marries Martha's cousin, Elizabeth, and the two eventually move to the Ohio region.

While Simon's life progresses, a young Indian named Tecumseh rises to power amidst his own people. Tecumseh is a serious young man who excels at everything. His older brother foretells of his role as leader, and Tecumseh himself has the gift of prophesy. He joins with his younger brother, one of a set of triplets who is ultimately jealous of Tecumseh's popularity and eventually undermines his cause. Tecumseh wants to unite the Indian nations into a single band under his leadership, and with that united force demand that the whites return lands to them as the rightful owners. The plan falls short and Tecumseh and his followers join the British in the War of 1812. It's during a battle of this war that Tecumseh predicts his own death, to the grief of his people. It happens as he says, and it's Simon Kenton who identifies Tecumseh's body on the battlefield. However, Simon knows that the Americans will defile the chief's body, and his respect for the Indian prompts him to point out a different Indian as Tecumseh, clearing the way for the Shawnees to return and give their leader a proper burial.

Simon Kenton was captured by Indians, forced to run a series of gauntlets, and was almost executed. He was turned over to the British but managed to escape. He lived among well-known military and American figures, including Daniel Boone who he once saved from Indians. Simon died in 1836, surrounded by his family.

The Frontiersmen: A Narrative from BookRags. (c)2022 BookRags, Inc. All rights reserved.