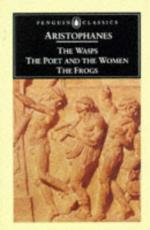 The Frogs, and Other Plays. Translated with an Introd. by David Barrett Setting & Symbolism

Aristophanes
This Study Guide consists of approximately 28 pages of chapter summaries, quotes, character analysis, themes, and more - everything you need to sharpen your knowledge of The Frogs, and Other Plays. Translated with an Introd. by David Barrett.

The Athenian courts were composed of at least 200 people citizens drawn from lot that would sit in judgment for that day. Jurors were paid for their service.

Libations are given in celebration and to quench the thirst of the dead and the gods. Usually wine, libations can also be any drink that party-goers may drink.

All Geek soldiers had a shield and javelin and maybe a sword. They needed to provide their own shield and these shields were heavy. The first think troops will do when retreating is to throw down their shields so they can run faster. The implication then if someone throws their shield is that they are a coward and a traitor.

Sparta was a Greek city-state south of Athens that was engaged in a long war with Athens. Aristophanes was opposed to the war, which was bankrupting his city...

More summaries and resources for teaching or studying The Frogs, and Other Plays. Translated with an Introd. by David Barrett.

The Frogs, and Other Plays. Translated with an Introd. by David Barrett from BookRags. (c)2020 BookRags, Inc. All rights reserved.