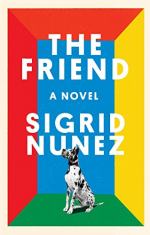 Related Topics
What Are You Going Through

Sigrid Nunez
This Study Guide consists of approximately 44 pages of chapter summaries, quotes, character analysis, themes, and more - everything you need to sharpen your knowledge of The Friend.

The Friend: A Novel Summary & Study Guide includes comprehensive information and analysis to help you understand the book. This study guide contains the following sections:

This detailed literature summary also contains Quotes and a Free Quiz on The Friend: A Novel by Sigrid Nunez.

The following version of this book was used to create this study guide: Nunez, Sigrid. The Friend. Riverhead Books, 2018. First Edition.

Nunez’s novel, The Friend, is narrated in the presence tense by an unnamed narrator, who tells the story of her blossoming relationship with a Great Dane named Apollo. Nunez’s novel does not rely on a typical linear plot, and instead, much of the novel is composed of the unnamed narrator’s eclectic musings. Throughout the novel, the narrator muses on the state of contemporary art, grief, the meaning of life, and her grief at her friend’s (referred to as “you” throughout the novel) suicide.

Throughout the novel, the narrator dips into her memories about “you” and past writing workshops she has been a part of. She remembers “you’s” various affairs with students and his belief that sexual encounters can be used in order to spur productivity in writing. The narrator further remembers how “you” lamented the field of contemporary writing, believing that writers who use writing in order to process events in their own life (rather than use writing in order to get at the truth) were the death of literature.

The narrator then goes on to remember a writing workshop she ran at a center for victims of human trafficking. The narrator describes the suffering these women went through and struggles to accept the profound evil these women had to face. This writing workshop reminded the narrator of the movie Lilya 4-Ever, in which a 16-year-old girl is sold into sex slavery and, as a result, kills herself. Ruminating on these events, the narrator seriously questions the value of life and the place of evil in the world.

During this time, the narrator and Apollo have become increasingly close, so much so that she and the dog sleep on the same bed and spend all their time together. A few of the narrator’s friends worry about her, and as a result, she goes to therapy. During therapy, the therapist suggests the narrator writes about “you’s” suicide, telling the narrator she was in love with “you.”

The narrative style of the novel then switches from first-person to third-person, and the point of view is focalized through an unnamed woman. Nunez reveals the novel’s major plot twist: namely, that the unnamed narrator and “you” are, in fact, fictional creations of someone else. An unnamed woman reveals she has been writing a novel about an unnamed narrator, “you,” and Apollo in order to process the suicide attempt (which was unsuccessful) of her own friend (a man). The novel then stages a conversation between this woman and man, in which they argue about the nature of art. Like “you,” the man thinks that art should be a work of imaginative creation, aiming at the truth; and like the unnamed narrator, the woman thinks that art should attempt to articulate the injustice in the world and empower victims.

More summaries and resources for teaching or studying The Friend: A Novel .

The Friend: A Novel from BookRags. (c)2022 BookRags, Inc. All rights reserved.