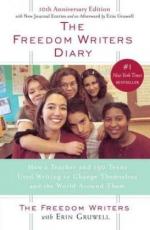 Erin Gruwell is a first-year English teacher at Wilson High School in Long Beach, California. Although she was a student teacher at Wilson High the year before, this year she would teach on her own. Not only would she teach on her own, as a teacher with little to no seniority, she was given the "unteachable" students, those who are more concerned with gang activity and matters of "turf," rather than the study of Shakespeare, subjects and predicates.

Wilson High is located in a so-called "safe" neighborhood in Long Beach, California, just a few miles from the Pacific Ocean. Its "safe" location, makes it a desirable educational institution, so much so that many students will take two to three buses just to get to that particular school. This means that wealthy students will attend classes along side poor kids from the projects. Gruwell states that every race, religion and culture is represented.

Throughout the years, the predominately Caucasian population at Wilson has evolved radically to include African Americans, Latinos and Asians who now comprise the bulk of the student body. Although Gruwell stated that she initially (and naively) wanted to ignore skin color and cultural differences while student teaching, she was immediately confronted with both.

What happened next created a turning point for both teacher and students. After a student created a large lipped caricature of a particularly difficult student named Sharaud, Gruwell pointed out that caricatures were a common tool of the Nazis during the Holocaust. When not one student knew what the Holocaust was, Gruwell immediately changed teaching strategies and eventually began teaching these so-called unteachable students information to which they could relate, presenting titles that teach tolerance such as the Anne Frank's diary, Schindler's List and Zlata's Diary: A Child's Life in Sarajevo.

As time goes on, Gruwell uses all the resources at her disposal to make history and literature come alive for these students. They visit the Holocaust Museum and the Museum of Tolerance. They also travel to Washington D.C. to met with the US Secretary of Education. They meet Miep Gies, the woman who sheltered Anne Frank and her family during World War II, and raise money to fly Zlata Filipovic from Europe to California. Filipovic is their own age and survived the Bosnian war and eventually got her diary, Zlata's Diary: A Child's Life in Sarajevo published.

Throughout their high school years, each student in Gruwell's class kept a diary. After the classroom received computers, they started keeping a class log as well. Each student anonymously posted entries into the group file, eventually creating a massive missive of entries. These entries would eventually be pared down into what would become The Freedom Writers Diary.

This explains the unique layout of this book. Each chapter begins with an entry by Erin Gruwell. The following entries are simply numbered, including no identifying information about the author whatsoever. It's this unique story telling style that makes for a very powerful book.

As each entry advances the "story" told throughout this text, we get to watch events unfold through various points of view. The raw writing style is often abrasive, yet captivating. As each writer chronicles the events during this four-year period from freshman to senior, the reader is carried on many waves of emotion as each student portrays their life, and the awakening of the Freedom Writer within themselves, as they progress through Wilson High.