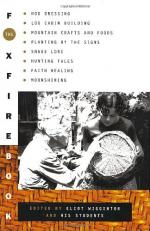 Plot Summary
+Chapters Summary and Analysis
Introduction
"This is the Way I was Raised Up"
"Aunt Arie"
"Wood"
"Tools and Skills"
"Building a Log Cabin"
"Chimney Building"
"White Oak Splits," "Making a Hamper out of White Oak Splits" and "Making a Basket out of White Oak Splits"
"An Old Chair Maker Shows How"
"Rope, Straw, and Feathers are to Sleep on"
"A Quilt is Something Human"
"Soapmaking"
"Cooking on a Fireplace, Dutch Oven, and Wood Stove"
"Daniel Manous"
"Mountain Recipes" and "Preserving Vegetables"
"Preserving Fruit" and "Churning Your Own Butter"
"Slaughtering Hogs" and "Curing and Smoking Hogs"
"Recipes for Hog"
"Weather Signs" and "Planting by the Signs"
"The Buzzard and the Dog" and "Home Remedies"
"Hunting"
"Dressing and Cooking Wild Animal Foods"
"Hunting Tales"
"Snake Lore"
"Moonshining as a Fine Art"
"Faith Healing"
"Hillard Green"
Free Quiz
Characters
Objects/Places
Themes
Style
Quotes
Topics for Discussion
Order our The Foxfire Book Study Guide

Eliot Wigginton
This Study Guide consists of approximately 77 pages of chapter summaries, quotes, character analysis, themes, and more - everything you need to sharpen your knowledge of The Foxfire Book.

This detailed literature summary also contains Topics for Discussion and a Free Quiz on The Foxfire Book by Eliot Wigginton.

The Foxfire Book is a compilation of articles written by high school students for a magazine called Foxfire. Originally started in 1968 by high school teacher Eliot Wigginton, Foxfire was created as an attempt to entice young high school students to learn the history of their society, as well as to preserve the knowledge and traditions of the people residing in the Appalachian Mountains of Rabun Gap, North Carolina. The characters described within these stories live virtually unaided by modern society and often grow their own food, raise their own sources of meat, and use their skills, passed generation to generation, to make furniture, cure disease, hunt for provisions, and even build houses. Presented in the dialect of the people as told by the individuals themselves, this collection is not only a wealth of information about building cabins and furniture, creating home remedies, cooking, hunting, and farming, but is also a valuable record of a nearly extinct way of life for the Appalachian mountain people.

This non-fiction book is a collection of articles and essays about traditional life in the Appalachian Mountains. The novel opens with "this is the way I was raised up," written by Mrs. Marvin Watts, which chronicles the childhood of one woman living in the Appalachians in the early part of the century. Following this essay, an interview with a kindly elderly woman, "Aunt Arie," is presented, in which Arie describes her traditional cooking methods, her upbringing in the Appalachian Mountains, and her triumphs and trials as an older woman alone in a log cabin in the mountains. "Wood," "Tools and Skills," "Building a Log Cabin" and "Chimney Building" are presented next as a set of articles designed to educate readers on the materials, skills, tools, and processes involved in building a log cabin. The next set of articles discusses the white oak split and its various uses. "White Oak Split" describes the creation of splits. These splits are thin pieces of prepared white oak wood, commonly used in homemade baskets, bedding, chairs, and hampers. The following articles, "Making a Hamper out of White Oak Splits" and "Making a Basket out of White Oak Splits" describe the use of the white oak split to create various household items.

The next four articles pertain to the creation of household items and necessities. In "An Old Chair Maker Shows How," Lon Reid explains how to build a chair completely from scratch, using only homemade tools. "Rope, Straw, and Feathers are to Sleep on" presents stories, written directly in the dialect of the speaker, of four woman's memories surrounding the types of beds they have used throughout their lives. In "A Quilt is Something Human," the woman of the community discuss the art of quilt making, including the traditions and customs associated with the practice. "Soapmaking," based on an article written by a student about her grandmother, interviews four women who give tips and tricks on how they make their own soap.

Five articles are presented next that discuss cooking and preserving foods. In "Cooking on a Fireplace, Dutch Oven, and Wood Stove," these three cooking devices, still in use in many Appalachian cabins, are explained and photographed. In "Mountain Recipes," twenty-nine recipes, often detailed in the dialect of the speaker, are given, including recipes for stews, vegetables, breads, cakes, pies, and beverages. "Preserving Vegetables," also written in dialect, explains how to preserve vegetables using drying, burying, and pickling methods. "Preserving Fruit," continues the discussion, explaining how to bleach and dry fruits, as well as how to make syrups, jams, jellies, and preserves. "Churning Your Own Butter" describes the churning process in full, and includes photographs of homemade churns and individuals practicing the act of churning.

The following three articles describe the slaughter, curing, and cooking of hogs, a traditional form of meat used in the Appalachian Mountains. "Slaughtering Hogs" describes the early methods of slaughtering a hog, many of which are still used in this area. In "Curing and Smoking Hog," the various ways to perform each task are outlined. "Recipes for Hog" explains recipes for eighteen parts of the hog, including the tongue, brain, heart, and head, as well as more common areas. The next two articles, 'Weather Signs" and "Planting by the Signs" discuss the folklore and traditions surrounding weather prediction and farming by the signs of the Zodiac. "Weather Signs" informs readers of weather prediction techniques using animal, plant, and insect behaviors, as well as by weather patterns, fire behaviors, and moon cycles. "Planting by the Signs" first explains the traditional planting method using the signs of the Zodiac, and explains how each sign is related to the planting, reaping, and harvesting of crops. "Home Remedies" records homemade cures and folklore procedures for curing forty-seven different ailments, ranging in alphabetical order from arthritis to yellow jaundice. These recipes include common-sense formulas such as a cast made from red clay for a broken bone, modern folklore concepts such as using magnets for arthritis pains, and potentially lethal advice such as holding a baby with croup over a burning saucer of turpentine.

Three articles are presented involving the art of hunting in the Appalachian Mountains. "Hunting" presents stories, written in the dialect of the speakers, told by the older generation of citizens in the community relating to hunting various games, such as bear, raccoon, and deer. "Dressing and Cooking Wild Animal Foods" explains how to cure, dress, and cook eleven different game species, including turkey, frog, turtle, possum, and others. "Hunting Tales" presents ten stories of hunting humor and tales of nearly missed large game.

In "Snake Lore," local residents tell twenty-one tales of snakebites, near bites, and legendary snakes. "Moonshining as a Fine Art" recounts the history of moonshine, a common practice in the Appalachian Mountains, and discusses each step in the creation of the illegal drink. In "Faith Healing," interviews with those who practice the questionable art of healing through faith are presented. These interviews and stories of healing are presented in an unbiased way, allowing the reader to draw conclusions on their validity.

Three other articles are presented within this book, those of "Daniel Manous," "The Buzzard and the Dog" and "Hillard Green." In "Daniel Manous," Mr. Manous describes an encounter with a snake handler preacher who learns the difference between listening to the will of God and listening to humankind. In "The Buzzard and the Dog," resident Bill Lamb tells an amusing tale of a buzzard tricked into thinking a dog was deceased by the smell of rotten fertilizer. The final article, "Hillard Green," is perhaps the most telling article of the book. Hillard Green is a local resident situated far into the Appalachian Mountains. Hillard tells of his opinions on government, monetary gain, parenting, women, space flight, and the eventual destruction of the modern world. While dark in content, the article is presented with a feeling of righteousness and dignity that perhaps only those of the naturalistic, money-free mountain life can truly understand.

More summaries and resources for teaching or studying The Foxfire Book.