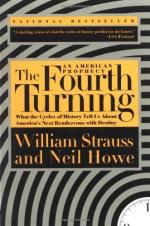 Strauss and Howe
This Study Guide consists of approximately 26 pages of chapter summaries, quotes, character analysis, themes, and more - everything you need to sharpen your knowledge of The Fourth Turning.

This detailed literature summary also contains Topics for Discussion and a Free Quiz on The Fourth Turning: An American Prophecy by Strauss and Howe.

The Fourth Turning is a book that initially appears to concern history and prophecy. The book gives a history of various social movements and uses the structure of these movements to make predictions about the social upheavals of the next three decades. However, it is also a work of sociology and philosophy. The authors believe that human history is divided into cycles or 'saeculum' and they attempt to show that intellectuals in fields as wide-ranging as history, literature, economics and biology have discovered these cyclical patterns. The 'saeculum' vary in length depending on culture, but in the Anglo-American World appear to occur every eighty to one-hundred years. The saeculum are divided into four cycles (division into four cycles is characteristic of most historical divisions of time). Each age is called a 'turning.' The first turning is a 'high,' a period of cultural unity and achievement, the second turning an 'awakening' where the values of the old order are challenged. The third turning is an 'unraveling' during which institutions weaken from the challenge of the second turning. And the fourth turning is a 'crisis' where a new order replaces the old order.

Each saeculum is composed of an interaction between four generations, each of whom has a personality archetype. The archetypes are - prophets, nomads, heroes and artists. Prophets are indulged children, self-centered crusaders as young adults, focus on moral growth as mid-lifers and become wise as elders. Nomads are unprotected as children, grow up as alienated adults, 'mellow' in midlife as they become pragmatic and they become hardened 'post-crisis' elders. Heroes grow up protected in reaction to the failure by society to protect the child nomads; they are team players during a crisis, and acquire energy and hubris in mid-life. They then become great elders who the younger generations fight to overthrow. Finally, the artists are overprotected during the crisis, are sensitive as young adults, become free yet indecisive mid-lifers and become 'empathic' elders. These cycles of generations occur during a saeculum, with one of each generation being born, passing through life, and dying between crises.

These two elements - generational archetypes and turnings - function together to form a cyclical pattern of social change. The authors believe that currently the 'GI generation' or the World War II generation are the elder heroes of the 1990s (the book was written in 1997), the 'Silent generation' (those born during the depression and WWII), are the artists of our time, the Baby Boomers the prophets, the 13ers or 'Generation X' the nomads, and the Millienials (post-1982 children) are the new heroes. This age-ordering of generations occurs only during a third turning, which foreshadows the crisis period of a fourth turning.

The book has three parts. The first outlines the book's major concepts and encourages the reader to understand time as cyclical rather than linear. The second part illustrates the most recent first, second and third turnings in American history. It makes some general observations about the historical structures of fourth turnings and some predictions about how the next fourth turning will unfold. In the third part of the book, the authors teach us how to prepare for the fourth turning.

More summaries and resources for teaching or studying The Fourth Turning: An American Prophecy.