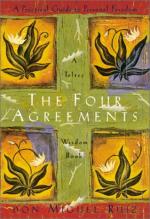 This Study Guide consists of approximately 24 pages of chapter summaries, quotes, character analysis, themes, and more - everything you need to sharpen your knowledge of The Four Agreements.

This detailed literature summary also contains Topics for Discussion on The Four Agreements by .

“The Four Agreements – A Practical Guide to Personal Freedom” by Don Miguel Ruiz describes a pathway for individuals who have been dominated by the beliefs and dictates of society’s view of what individuals should think, what they should believe and how they should act. The culmination of these concepts is referred to as the planet’s “big dream.” While agreement with this scenario keeps people in line, it also zaps them of their freedom to choose and think, depletes their energy and strips them of their true identity.

Ruiz has developed a pathway that will allow an individual to reclaim the freedom of expression and action, a right that he was born with. As an adult, his identity was lost long ago. While he was a joyful and wild thing when he was a toddler, as he matured he became aware that there were a set of rules—big important rules—that everyone was required to adhere to. Even though he had ideas and thoughts that were not in alignment with the rules of society’s “big dream,” there were no opportunities to opt out, there were no choices.

As a result, the child learned to “act” like what everyone – his parents, his teachers and his clergy – expected him to be. He had to repress his own dreams, and his identity began to blur, fade and disappear. Eventually, the child who has matured into an adult no longer needs to be policed by authority figures to stay on the straight and narrow. He buys into the big dream and has a tacit agreement with the beliefs and values that comprises it.

Based on his family’s devotion to ancient Toltec wisdom, Ruiz has created a solution to this loss of identity and the frustration, fear, pain and sadness that accompanies the struggle to exist with a false identity. He summarizes it into Four Agreements. His thesis is that once a child matures and has agreed with the tenets of the big dream, he has lost his freedom and is existing in a hell on earth. And on the way, he has been mistreated, abused and sentenced to an unsatisfactory life devoid of joy and stripped of freedom and identity.

The punishment is self-inflicted. The individual develops an internal Judge who is harsh and merciless. When the person strays from his pact with the big dream, the Judge sentences him to guilt, blame and shame. The individual who has become a Victim, accepts the punishment because he deserves it. He also accepts the reality that he lives in a hell on earth, finding comfort in the fact that everyone else does, too.

Ruiz acknowledges that it is difficult to leave a lifetime of rules, regulations and restrictions behind. However, breaking the agreement with the big dream and the multitude of minor agreements made over a lifetime and adapting new agreements in their place – agreements that suit the individual – the real person will emerge and this newly liberated person will be able to find truth and happiness. The Four Agreements are: always speak impeccably, don’t take anything personally, don’t make assumptions and always do your best.

By ascribing to Ruiz’s antidote to a joyless life of hell on earth and adopting the Four Agreements, the individual will be able to emerge from the abyss and attain freedom, joy, bliss and… heaven on earth.

More summaries and resources for teaching or studying The Four Agreements.