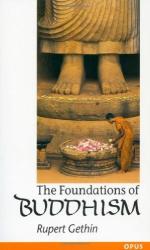 The Foundations of Buddhism Summary & Study Guide includes comprehensive information and analysis to help you understand the book. This study guide contains the following sections:

This detailed literature summary also contains Topics for Discussion and a Free Quiz on The Foundations of Buddhism by Rupert Gethin.

The Foundations of Buddhism is intended as an introduction of Buddhism to the lay reader. The author emphasizes throughout the book that Buddhism is not confined to one strand or tradition, but instead is a wide-ranging and extraordinarily complex set of religious practices and philosophical beliefs with a 2,500 year history. The book focuses on common threads between the major Buddhist traditions and attempts to bring out shared beliefs, practices and philosophies.

Buddhism divides into three major traditions, the Theravada tradition of Sri Lanka and South-East Asia or "Southern" Buddhism, the Mahayana tradition of East Asian in China, Korea, Japan and Vietnam or "Eastern Buddhism", and Tibetan or "Northern Buddhism." All three traditions originated in ancient Buddhism in India in an area where it has practically disappeared.

The author not only focuses on Buddhist beliefs but on scholarship on the study of Buddhism. Rather than emphasize the differences between Buddhist traditions, he tries to bring out similarities in each chapter, despite realizing that the way a Buddhist laywoman in Bankok and a nun in Lhasa conceive of Buddhism may differ substantially. In this way, the author hopes to go beyond a simple textbook view of Buddhism along with its historical developments. This book is also unique in its detailed explanation of Buddhist cosmology, the doctrines of no self and dependent arising, the idea of the path of meditation and the elaborate and philosophical Abhidharma framework.

After a brief introduction, the Foundations of Buddhism divides into ten chapters. Chapter 1, The Buddha, introduces the historical Buddha, Siddhartha Gautama, and the little that historians known about him. While some Buddhists are focused on his literal life, most see his life as a legendary tale meant to have religious and philosophical significance. The author also explains the nature of a "Buddha" figure. Chapter 2, The Word of the Buddha, elaborates the concept of Dharma and Buddhist Scriptures in terms of Sutras and Abhidharma. Chapter 3, Four Truths, explains the central doctrines of Buddhism that suffering is the disease that can be eliminated by the cessation of desire.

Chapter 8, The Abhidharma, explains the complex "higher" teaching of Buddhist and analyzes it as a system of Buddhist thought. Chapter 9, The Mahayana, explains the key concept of the "great vehicle" path to Buddhahood and the traditions of Mahayana practice. Finally, Chapter 10, Evolving Traditions, outlines the developments within the three traditional schools of Buddhism geographically and theologically along with Buddhism's spread into the West.