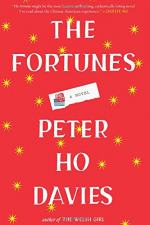 The Fortunes Summary & Study Guide includes comprehensive information and analysis to help you understand the book. This study guide contains the following sections:

This detailed literature summary also contains Quotes and a Free Quiz on The Fortunes by Peter Ho Davies.

The following version of this book was used to create this study guide: Ho Davis, Peter. The Fortunes. Houghton Mifflin Harcourt, 2016.

The Fortunes is comprised of four interconnected short stories that examine themes like fortune, women, identity, names, and ownership through the lens of the Chinese American experience. Author Peter Ho Davies uses a historical basis for the first three stories while the last is entirely fictional. The first story, Part 1: Gold - Celestial Railroad depicts an orphan Ah Ling, who came to America at age fourteen having been sold to a laundryman, Uncle Ng. His late mother a Chinese prostitute and his father an unknown Western man, Ling was biracial and struggled to assimilate to 19th century America. Ling worked for Ng, but he desperately wanted to strike it rich and earn enough gold to be wealthy. His colleague at the laundry service was Little Sister, a young Chinese prostitute who worked as a courtesan for Ng's customers. Ling was infatuated with Little Sister, though she would not sleep with him unless he paid her. Ling was soon employed by Charles Crocker, a laundry customer and a titan of the railroad industry. He hired Ling to be his live-in laundryman and manservant. Ling was overjoyed, and he spent his first gold coin on a session with Little Sister and quit Ng's employment. Little Sister revealed to him that she was Ng's daughter and that he used her prostitution to earn money. Ng was shocked at the matter of fact attitude of Little Sister and Ng both at what they saw was a matter of business and profit. Little Sister was eventually sold to another man. With Crocker, Ling was often used as a representative of his race. Crocker had something of a taste for Chinese goods, people, and prostitutes. Ling was happy to be near him and earn money and respect, but gradually he realized that Crocker was using him for his language skills and his appearance to be a kind of buffer between himself and the Chinese workforce he hired to create the Transcontinental Railroad. Ling tried to negotiate between Crocker and striking Chinese workers. Conversing with the workers, Ling realized that he felt at home with them. He left his job with Crocker and worked on the railroad line and later as a bones collector, cleaning and sending the bones of Chinese men back to their villages in China, as was custom. Ling did work his way back to San Francisco and was reunited with Little Sister, who now called herself "Madame Celeste," now an owner of a brothel. She let him sleep with her for free, and they were happy to be together again.

The second story, Part 2: Silver - Your Name in Chinese, details the life of Anna May Wong, the first famous Chinese American film actress. Anna grew up the daughter of a laundry owner in Los Angeles' Chinatown. She loved going to the cinema, first to disappear in the dark theater and then because she loved the art of acting. Anna pursued her dream to become a film actress despite her strict father's disapproval and beatings. Anna's persistence—and her ability to seduce older directors, actors, and producers—helped her gain fame. Anna received many starring roles in female Chinese characters, though they were only ever seductresses, villains, mistresses, and prostitutes. Anna struggled to find substantive roles, which was difficult when many Chinese characters were being played by white actors in so-called yellow face. Moreover, the Hays Code restricted the depiction of interracial romantic couples onscreen unless both characters were of the same race. Since there were no male Chinese actors at Anna's level, she was boxed out of these roles. Anna decided to take a trip to see her father in his village in China since he had moved back a few years earlier. Anna was able to pitch this as a documentary, and a cameraman, Newsreel Wong, accompanied her. Anna found China to be both comforting and perplexing. In Hollywood, she was a rarity, but in China she felt adrift in a sea of anonymity, especially when she could not speak Mandarin. Her films were not as well-received as she thought they would be. Critics felt that she was being exploited by taking roles that depicted Chinese women in a negative light. Anna's reunion with her father was emotionally moving, though she knew she could never stay there with him because she would be seen as just a daughter, not a remarkable woman with a solid career. The story follows Anna's career after she returned to America. She tried to get better parts, which meant smaller parts, and she fell out of the limelight. Meanwhile, World War II began, and the Chinese were seen in a sympathetic light again. Anna settled into a quieter life, though she assisted with benefits to help the Chinese. She felt that she could see some of her mannerisms in the international leader Madame Chiang's expressions, which made Anna think she had contributed to how the Chinese thought an American woman would behave after seeing Anna act.

The third story, Part 3: Jade - Tell It Slant, is told from the perspective of an unnamed narrator who was a friend to Vincent Chin and a witness to his murder in 1982. Vincent Chin was a 27 year old man who lived in the Detroit suburbs. Chin was the adopted son of an older, Chinese American couple who could not conceive. The narrator grew up with Chin and was a friend of his. He was there on the night Chin was murdered by two white men who thought he was Japanese and therefore a target of their antagonism against Japanese automobile imports supposedly stealing jobs. The narrator detailed the events that night on what was supposed to be Chin's bachelor party. The men got in a confrontation with Chin which led to him being hunted down in the neighborhood. The narrator reflected on his guilt from that night and the lingering questions he still had, the possibilities he thought about after the case became a landmark case in the pan-Asian civil rights effort. The narrator would sometimes reinvent key details of the story halfway through and was thus unreliable. Still, the murder and its aftermath impacted the way he saw America. Above all, he wanted to stay anonymous, never revealing his name.

The fourth and final story, Part 4: Pearl - Disorientation, follows a writer, John Ling Smith, and his wife, Nola, as they traveled to China to adopt a Chinese baby girl. John and Nola had difficulties with conceiving a child without genetic abnormalities, and they had to terminate two pregnancies. John made his living as a writer of literary fiction and as an instructor of writing at a college. John, the biracial son of an American pilot and a Chinese stewardess, suffered an embarrassing moment when someone confronted him about using the wrong translations for Chinese words in his fiction. John was able to survive the scandal, but he felt as conflicted as ever about the pressure he was under from his publisher, his colleagues, and the university to embrace his Chinese heritage and write almost exclusively about that. John made a good living cranking out pulpy novelizations of the Kung Fu TV show universe. Nola suggested that they look into adopting a Chinese baby girl, since China's one-child policy left China with an excess of baby girls. This had created the Chinese adoption industry. John and Nola arrived in China for the adoption. They were part of a group of American foster parents. They were required to tour China and see certain landmarks as a condition of adopting a Chinese baby, as well as a hefty adoption "donation" to be paid in cash to the orphanage. The night before Gotcha Day!, the adoption day, John felt restless. He had been having trouble sleeping. He left his room and went down to the hotel bar. John thought about how the other foster parents envied him for his heritage and his appearance, since he would be able to look right next to his daughter. John felt frustrated at the position people were putting him in on the tour, that he should know Chinese when he did not know any and that he should know certain things about Chinese history and culture. John knew they only meant well, but he felt uneasy about the adoption process and how it felt like a transaction, as if he were buying a baby girl to own. A conversation with a Chinese prostitute, Pearl, at the bar showed John that Chinese women could be trapped here. Maybe his buying a Chinese baby felt like an exchange of business, but leaving her stranded here would likely be much worse. On "Gotcha Day!" morning, every other foster couple or parent got paired up with their baby except John and Nola. Napoleon, the young woman who acted as their guide, told them that the girl they were going to adopt, Mei Mei, was sick and they would go get her at the country orphanage later that afternoon. At the orphanage, John and Nola are given a baby they know at once is not Mei Mei. They are told that Mei Mei died earlier that morning. At Nola's request, they go to see Mei Mei's corpse. They are then forced to choose a new baby to take with them. John and Nola accept the baby they were given. In the hotel lobby, John and Nola see Pearl. Pearl gave them her blessing to adopt the child, and then John and Nola took their new daughter upstairs. John suggested they name their baby, "Pearl," and Nola agreed. They wondered about life will be like for their daughter. As Nola and Pearl slept, John thought about how Pearl was getting the gift of a clean slate and an opportunity to become who she wanted in America because of the promise of its possibility.

The Fortunes from BookRags. (c)2022 BookRags, Inc. All rights reserved.