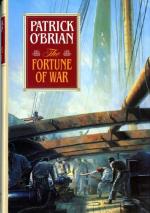 Patrick O'Brian
This Study Guide consists of approximately 33 pages of chapter summaries, quotes, character analysis, themes, and more - everything you need to sharpen your knowledge of The Fortune of War.

The Fortune of War Summary & Study Guide includes comprehensive information and analysis to help you understand the book. This study guide contains the following sections:

This detailed literature summary also contains Topics for Discussion and a Free Quiz on The Fortune of War by Patrick O'Brian.

Aubrey and Maturin return from presumed lost at sea and attempt to return home on a doomed voyage. They are passengers first on a ship that burns, then are rescued by a ship that is captured, and finally escape to a ship that engages the enemy only hours later. Along the way Aubrey is severely injured and Maturin is pursued by French intelligence agents determined to kill him—all part of the Fortune of War.

Having survived an eventful but plagued voyage aboard HMS Leopard, Aubrey and Maturin return to civilization where Leopard is converted to a transport due her great age and poor condition. The two friends, accompanied by a handful of long-time friends, take voyage to England on La Flèche, a quick ship. During the voyage, however, fire breaks out and La Flèche is lost. Aubrey, Maturin, and the other Leopards end up in an eighteen foot long cutter set adrift in the vast ocean. They suffer severely for many days until they are rescued by HMS Java, a frigate transporting diplomatic passengers.

Saved, the men quickly recuperate and learn that war has been declared between England the America. Then, HMS Java runs afoul of USS Constitution, a magnificent frigate with many large guns. A hot ship-to-ship action occurs and Aubrey participates by captaining guns in the waist. He is seriously wounded—his right arm utterly shattered—but fights on until Java is disabled and strikes her colors. Most of the English sailors are quickly paroled but Aubrey and Maturin are transported over several days to Boston where Aubrey is transferred to a private hospital, a hovering Maturin amazed that he is still alive.

In Boston Aubrey slowly recovers his health but suffers a bleak depression brought on by a long string of English defeats. He carefully watches the American Navy and dreams about not being a prisoner of war. Meanwhile, Maturin is pursued by French intelligence agents who attempt to kidnap him, obviously a prelude to torture and murder. At the same time, Aubrey befriends Herapath and his father—Herapath being an old friend. Maturin also meets his love interest, Diana Villiers, who is in the company of Johnson, a vitriolic and passionate patriot engaged in private intelligence work and involved with the French agents. Villiers is slowly becoming estranged from Johnson and fears for her safety.

When the situation becomes untenable, Aubrey, Maturin, and Villiers escape to a boat and head for the open sea. They are eventually picked up by HMS Shannon, on station blockading Boston harbor. They are also pursued by USS Chesapeake, and a hot ship-to-ship action ensues. Fortunately for the heroes, the English are finally victorious and Chesapeake strikes her colors as the novel concludes.

More summaries and resources for teaching or studying The Fortune of War.

The Fortune of War from BookRags. (c)2022 BookRags, Inc. All rights reserved.