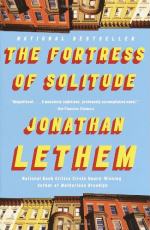 This Study Guide consists of approximately 43 pages of chapter summaries, quotes, character analysis, themes, and more - everything you need to sharpen your knowledge of The Fortress of Solitude.

The Fortress of Solitude Summary & Study Guide includes comprehensive information and analysis to help you understand the book. This study guide contains the following sections:

This detailed literature summary also contains Quotes and a Free Quiz on The Fortress of Solitude by .

NOTE: Citations in this study guide specifically refer to the September 2004 First Vintage Contemporaries Paperback Edition of The Fortress of Solitude by Jonathan Lethem.

The Fortress of Solitude is an historical novel by Jonathan Lethem which recounts the childhood and growing up of white kid Dylan Ebdus and black kid Mingus Rude in Brooklyn through the 1970s. When the novel begins, Isabel Vendle, an incredibly wealthy white woman, moves onto Dean Street, where she begins to buy buildings, fix them up, and to encourage white families to move into the area in order to restore the neighborhood. Among the first white families to move to the area are Abraham and Rachel Ebdus along with their son, Dylan.

Dylan is unconcerned being around so many black kids at first, though he does quickly grow tired of everyone calling him “white boy.” Rachel herself is not happy with the new location, believing there is a world beyond Dean Street, while her husband and son come to look at Dean Street as the extent of the world. Rachel begins fighting with Abraham and abandons the family. Before she does, she predicts that Dylan will become best friends with the new kid next door.

The new kid next door is Mingus Rude, the mixed-race son of famous has-been black soul singer, Barrett Rude, Junior, of the group The Distinctions. Dylan and Mingus quickly become friends over their mutual love of comic books. They come to spend all their free time together, either in defending their street against threats like Robert Woolfolk, a black kid from another street, or playing ball with the other kids on Dean. As the boys grow, they encounter a homeless man and drug-addict who says he can fly, and who Abraham sends to rehab out of kindness. The man gives Dylan a small silver pinky ring which he claims gives him the power to fly. As time passes, Dylan and Mingus use the ring to pretend they know how to fly and to take on the persona of Dylan’s invented superhero, Aeroman.

As both boys move into their teenage years, Mingus begins using marijuana, then coaxes Dylan into using it as well. Through their teenage years, they get high frequently, while Mingus disappears for weeks at a time (his disappearances are never explained). Dylan does his best to stay on top of his academics and is placed into an elite high school as a result. At the age of eighteen, Dylan comes to realize that his life and Mingus’s life are on different paths. When Mingus’s grandfather confronts him and his father about their drug use with a gun, Mingus shoots and kills his grandfather and goes to jail.

Dylan heads off to school at Camden, Vermont, where he is kicked out for drug use; and then transfers to Berkeley in California, where after graduating, he becomes a music journalist. There, through his late thirties, he dates a girl named Abby and meets up with his father, now a famous science fiction novel cover artist, in Anaheim. From Abraham, Dylan learns that Mingus has given up one of his kidneys to save his father’s life. Dylan decides it is time to return to the old neighborhood.

Dylan misses his childhood deeply. He sees that Dean Street has changed in many ways – it has been updated, cleaned, and so on – but in many ways, it remains the same. Drugs and crime are still rampant, and many of the kids who grew up there are still there. Dylan heads upstate to visit Mingus in prison, and while they are friendly, it is clear they are not really friends anymore. As Dylan drives home, he stops at the University of Indiana where he visits with Croft, the nephew of Isabel, who reveals it was he who ran off with Rachel so many years before. He has not seen her since. Dylan realizes his mother ran away from what she believed to be a regular human life, while Dylan himself longs to return to his childhood.

More summaries and resources for teaching or studying The Fortress of Solitude.

The Fortress of Solitude from BookRags. (c)2022 BookRags, Inc. All rights reserved.