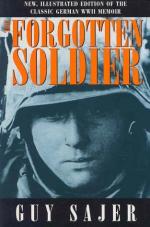 Ost Front und Panzer Wolfram is a propaganda magazine that is produced by the German military and circulated among the soldiers of the eastern front. During the early stages of Sajer's military career he has access to the publication (e.g., p. 84, p. 287, etc.) and the soldiers tend to believe that what it reports generally is true. However, the paper's falsehoods create problems for the soldiers at they assume they are safe in areas that the Russians have recaptured; they also assume that the war is going well for Germany everywhere except for in their immediate sector. In the winter of 1943 the magazine begins to report that France has joined with Germany as an ally.

Popov is the German pejorative for a Russian soldier; they are often referred to as Ivan, Ivans, or Muzhiks. Muzhik usually is translated as...