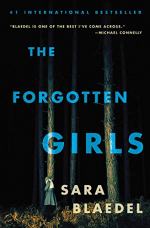 Blaedel, Sara
This Study Guide consists of approximately 43 pages of chapter summaries, quotes, character analysis, themes, and more - everything you need to sharpen your knowledge of The Forgotten Girls.

This detailed literature summary also contains Quotes and a Free Quiz on The Forgotten Girls by Blaedel, Sara.

Danish detective Louise Rick is in charge of a new police unit tasked with finding missing persons. Her first case involves an unidentified woman who appears to have fallen off of a small cliff near rural Avnsø Lake. This, coincidentally, is the region where Louise grew up. Louise is given few resources to complete the job, and also must work with an apparently alcoholic colleague, Eik Nordstrøm. When Louise and Eik first return to Anvsø Lake to investigate the scene, they discover the murdered body of a child caretaker, eventually found to be named Karin Lund, and three crying children surrounding her.

Eik begins to work hard on the case, arriving earlier to work than Louise. After the department released a photo of the unidentified woman, Louise receives a call from a woman named Agnete Eskilden, who recognizes the woman as a patient of hers, named Lismette, when Agnete worked at an institution for the mentally disabled named Eliselund in the 1960s. Louise and Eik visit the institution, and find that there were twin sisters, named Lise and Mette Andersen, who had been in the institution. However, they had death certificates written for them in 1980, which is about 30 years ago. The recently deceased woman appears to be Lise, since both are described as having a facial scar. The detectives contact the Andersen girls’ father, Viggo, who says that Eliselund had discouraged him from visiting when he was a young father. Viggo had simply received notice that the girls had died in 1980, but had never been invited to a funeral for them. Both Viggo and the detectives now turn their attention to finding if Mette is still alive.

Over several days, Louise and Eik conduct several interviews in the Avnsø Lake area. As they do so, a young pregnant woman in the region goes missing. Louise’s work on the case personally uncovers many dark moments from her past. 20 years earlier, her then-boyfriend, Klaus, had suddenly hung himself shortly after the passionate couple had moved in together. The Forensic Department researches the DNA‌ on semen samples that were found on both Lise and Karin’s bodies at the time of their deaths. While the two samples match each other, they do not match any person in the Danish database. Another rape is reported in the Avnsø Lake area. Louise interviews the victim, Bitten, who describes how the rapist had calmly walked into her house and had roughly assaulted her. Bitten’s husband, René Gamst, who Louise recognizes from her young adulthood, vows to personally track down and kill the rapist in the forest.

Eik and Louise interview Birte Holsted, the widow of the doctor, Ernst Holsted, who had signed the Andersen sisters’ death certificate shortly before hanging himself. The detectives also realize that a local woman they had previously interviewed, Bodil Parkov, was actually the director of Eliselund at that time. The detectives return to Bodil and talk again to herself, plus now also her somewhat odd and childlike husband, Jørgen. Bodil says she does not remember many of the events in 1980, although she resigned from Eliselund at about the same time. That night, after Eik and Louise go to dinner with some of Louise’s friends, Eik and Louise make love, after having bonded together during the course of the investigation.

As Eik and Louise continue to investigate, they discover in the records that Jørgen is in fact Bodil’s brother, despite her claims that he is her husband. Eik also finds a file in an archive that notes Jørgen had many “sexual abnormalities” over a series of incidents from 1958-1962. Louise interviews a woman, Edith Rosen, who had been the Parkovs’ neighbor at that time. Edith describes how Jørgen was struck by a car while walking home from school with Bodil, his older sister, and sustained brain injuries. The brain injuries created an animalistic side of Jørgen, who would now begin to frequently sexually assault both Bodil and Edith, before the Parkov family finally moved away. Meanwhile, Eik arrests a longtime Eliselune employee, Lillian Johansen, who had also been an employee during 1980. Lillian describes how, at that time, Jørgen was kept at Eliselund, but not in an official capacity, and was frequently brought girls in order to satisfy his sexual appetite.

Eik and Louise go back to the Parkov house, where they discover Bodil by herself. As they search the house they now see a disgusting, prison-like room, containing a dark, soiled bed. Bodil admits that Jørgen had taken the missing pregnant woman captive, and was now in the forest hunting for her. As the detectives move out to the property’s barn, they discover Mette‌‌ Andersen, who is cowering in the corner of an improvised bedroom in the stall. Eik and Louise summon the broader police force, who begin to sweep the forest in pursuit of Jørgen. As they do, Louise interviews Bodil, who now describes how she had arranged for fake death certificates for the Andersen sisters, and had kept them at the house for the previous 30 years, in order for Jørgen to remain sexually satisfied. Since Jørgen was attracted to Lise, who had died while running away from the building, and not Mette, he had now instigated a series of violent crimes around the area. When Louise returns to examine the barn, she is suddenly discovered by Jørgen, who backs her into a corner and begins to roughly rip her clothes off. However, Jørgen is shot and killed by René Gamst. Gamst’s dismissive attitude towards Louise, even at this crucial moment, inspired Louise to investigate the events of her past.

More summaries and resources for teaching or studying The Forgotten Girls.