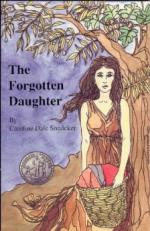 Caroline Dale Snedeker
This Study Guide consists of approximately 20 pages of chapter summaries, quotes, character analysis, themes, and more - everything you need to sharpen your knowledge of The Forgotten Daughter.

"The Forgotten Daughter" by Caroline Dale Snedeker is a Newberry Honor Book. It is also a historical novel for young adults. It details the life of Chloe, a simple slave girl, raised as a slave without the knowledge of her Roman father, Livaeus.

When the novel begins, Chloe is a twelve-year-old girl who works as a slave on the Villa Carracinia with her caretaker, another slave named Melissa. Melissa and Chloe's deceased mother Chloe, are Greek slaves captured by Chloe's father, Livaeus, who supposedly abandoned his wife and her mother years before, only to remarry, raise a new family, and fight in Egypt. Chloe's life as a slave is brutal, and she is constantly beaten. She flees to the freedom and security of the mountain forests whenever she can.

Chloe falls in love with Aulus Cornelius, from the next villa over, from afar. Years pass, and Aulus goes away to fight in Spain, and comes home to defend conservative politician Tiberius, who wants stolen lands returned to peasant Roman farmers. Aulus is banished from Rome when the Senate murders Tiberius, and he flees to his family's villa following the death of his mother.

At the villa, Chloe rescues Aulus from a stag trap and the two instantly bond over poetry, music, and philosophy. They fall in love, and agree to marry. But when Aulus is recalled to Rome, Chloe believes she, like her mother, has been abandoned, and so she and Melissa attempt to flee to Greece, but are captured and returned. Back at the villa, Chloe confronts her real father, who has fled fever epidemics in Rome. Laevinus reveals that his family had forbidden his marriage to Chloe, and believed both mother and daughter to be dead in childbirth. Laevinus and Chloe then become father and daughter, and Laevinus takes care of Chloe. He ultimately sanctions and blesses Chloe's marriage to Aulus, who returns from Rome after all.

More summaries and resources for teaching or studying The Forgotten Daughter.