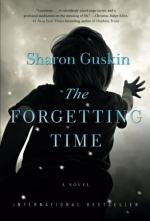 Sharon Guskin
This Study Guide consists of approximately 81 pages of chapter summaries, quotes, character analysis, themes, and more - everything you need to sharpen your knowledge of The Forgetting Time.

Nicknamed Horntail by the boys, the pet lizard of the Crawford house significantly ties Noah to his past life as Tommy. Tommy was so powerfully attached to the lizard that his memories and affection for the creature followed him into his next life as Noah Zimmerman. Janie's first memory of Noah's unusual behavior started when they were at the zoo and Noah pointed out the lizards in the exhibit and correctly named every single species, even though he was only two years old. Memories of Horntail proved to be significant enough to Tommy that they transferred into Noah's memories.

Likewise, the lizard gives Tommy courage and helps him go to the place that his haunted his dreams and memories for his entire existence, as he brings the scaly creature with him when he confronts Paul Clifford.

Denise's medication proves to be an...

More summaries and resources for teaching or studying The Forgetting Time.