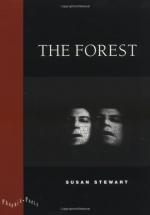 Susan Stewart
This Study Guide consists of approximately 22 pages of chapter summaries, quotes, character analysis, themes, and more - everything you need to sharpen your knowledge of The Forest.

Aubrey holds a Ph.D. in English and has published many articles on twentieth-century poetry. In this essay, Aubrey discusses "The Forest" in terms of the insulation of modern society from the life of nature and the psychological and cultural significance of the symbol of the forest.

In Theodore Roszak's brilliant polemic Where the Wasteland Ends: Politics and Transcendence in Postindustrial Society, which was written over thirty years ago, Roszak sounded the alarm about the spiritual emptiness at the heart of the scientific, technological society of the West. Roszak laments what he called the "artificial environment" that prevailed in urban areas. "City-dwellers," he writes, "have grown accustomed to an almost hermetically sealed and sanitized pattern of living in which very little of their experience ever impinges on non-human phenomena." The result is that people forget their connection with and dependence on nature.

More summaries and resources for teaching or studying The Forest.

The Forest from Gale. ©2005-2006 Thomson Gale, a part of the Thomson Corporation. All rights reserved.