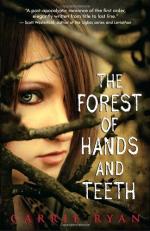 The Forest of Hands and Teeth Summary & Study Guide

Carrie Ryan
This Study Guide consists of approximately 25 pages of chapter summaries, quotes, character analysis, themes, and more - everything you need to sharpen your knowledge of The Forest of Hands and Teeth.

The Forest of Hands and Teeth Summary & Study Guide Description

The Forest of Hands and Teeth Summary & Study Guide includes comprehensive information and analysis to help you understand the book. This study guide contains the following sections:

This detailed literature summary also contains Topics for Discussion on The Forest of Hands and Teeth by Carrie Ryan.

When the novel begins, Mary lives a simple life in the village that is enclosed by the Forest, which is in turn, kept out by a fence. Guardians act as soldiers and also repair the fence. Mary has grown up listening to stories of the ocean, told by her mother. A few months before the novel begins, Mary's father went out into the Forest, never to return. Mary now awaits one of two futures: either she will be married, or she will be brought to the Sisterhood, a group that controls the village, its laws, and people. The Sisterhood praise God for allowing their village to continue to thrive despite the increasing number of Unconsecrated undead that roam the Forest. Mary's mother is ultimately killed by the Unconsecrated while looking among them at the fence for her disappeared husband. Mary's brother, Jed, is enraged by this, and sends her to the Sisterhood. At the Sisterhood, Mary is proposed to by Harry, whose sister has married Jed, and whose younger brother, Travis, is engaged to Mary's best friend, Cassandra. But Mary is in love with Travis. Mary consents to Harry's proposal, ultimately hoping she and Travis can find a way to be together.

However, the arrival of a stranger, an Outsider named Gabrielle, who is thrown to the Unconsecrated and becomes one herself, paves the way for the breaching of the fences. Gabrielle's Unconsecrated form leads the way, and Mary, Jed, his wife, Beth, and Travis, Harry, and Cassie escape the village, along with Mary's dog, Argos, and a little boy named Jacob. Beth is later killed as she is infected. They head out into the woods, along a path protected by fences. They come across the town from which Gabrielle had come, which has been overrun. While escaping that village, Travis is killed helping the others escape. At last, they come to a gate which leads out into the woods. From there, Mary makes a run for it, only to be chased by the Unconsecrated. Jed saves Mary's life, only to disappear among the Unconsecrated. Mary falls into the water of a river, and when she wakes up, a man is hacking off the heads of the undead. He explains that he lives in the lighthouse up the shore, and his job is to kill the undead to keep them out of the nearby town. Mary realizes that she is at the ocean.

More summaries and resources for teaching or studying The Forest of Hands and Teeth.

The Forest of Hands and Teeth from BookRags. (c)2022 BookRags, Inc. All rights reserved.