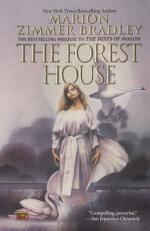 Marion Zimmer Bradley
This Study Guide consists of approximately 29 pages of chapter summaries, quotes, character analysis, themes, and more - everything you need to sharpen your knowledge of The Forest House.

This detailed literature summary also contains Topics for Discussion and a Free Quiz on The Forest House by Marion Zimmer Bradley.

The Forest House is the story of the love affair between Eilan, a native British woman, and Gaius, a half-Roman man raised by his Roman father. As such, it is also the story of how the Romans conquered Britain, and the aftermath of their invasion and occupation.

The story is bookended by a prologue and an epilogue told from the viewpoint of Caillean, a high priestess of a group of women on an island. She sets up the narrative as a story of how she came to found the House on the island. Caillean begins by telling of how Eilan and Gaius met; Eilan was in the woods with her friend and niece (though they are the same age), Dieda, when they find Gaius trapped in a pit set up to trap boars. He stays with their family for some time as he recovers from his injuries, not revealing that he is Roman, and eventually falling in love with Eilan. At the Beltane festival, he reveals who he is and says that he will return home but send a proposal for her hand in marriage to her father, who is a Druid.

However, though Gaius does this, Eilan's father refuses to let her marry a Roman, and she goes into the Forest House, where priestesses serve the Goddess, with Dieda. Caillean, one of the priestesses who is very close to Lhiannon, the current high priestess, takes Eilan under her wing, offering her a place at the house, training her, and confiding in her. Eilan enjoys her time there (unlike Dieda, who is in love with their foster-brother Cynric, who has gone off to fight the Romans), but still thinks of Gaius. Lost at another Beltane festival, she runs into him, and the two of them go off in the woods together and consummate their love.

Back at the Forest House, Eilan discovers that she is pregnant; however, she is also chosen as the next High Priestess when Lhiannon dies. Together with Caillean and her grandfather, the Arch-Druid, they construct a plan. She will officiate at the next rites, to be accepted by the people, and then be replaced by Dieda, who resembles her completely, until she has given birth. At that time, she will return and Dieda can go learn music from the bards, as she has always wanted to do. Dieda agrees, but it makes her bitter and her relationship with Eilan is never the same.

Eilan gives birth to a son, who she calls Gawen, after Gaius's Briton name. He comes to visit them, and again proposes to her; however, as High Priestess, she cannot abandon her post. Gaius, by this time, has been engaged to a Roman girl named Julia. They have several children together, all daughters; he dreams of bringing his son back to live with them. As his dreams of uniting with Eilan grow more and more distant, he falls in love with a young girl, Senara, who is being fostered at the Forest House, though she is a Christian. His wife, who has also converted to Christianity, has taken a vow of chastity and he decides to divorce her and marry Senara. At the same time, Caillean goes off to start her own House in Summer Country, after the Goddess speaks and says she must.

However, when Eilan hears of this, she tells Senara the true origins of Gawen, and Senara vows never to marry Gaius. Eilan feels that she will soon die, and starts preparing; she tells Senara to take Gawen away and eventually go to marry Gaius, though Senara does not want to. Meanwhile, Gaius hears of several soldiers who plan to rape the priestesses and goes to stop them; however, the Druids find that he has entered the Forest House and attack him. Eilan's father holds him up as an example, asking him (under torture) if he has intentions towards any of the priestesses. So that he does not reveal that he loves Senara, ruining Eilan's plans for them, Eilan says that it was she. After he is killed, she says that she slept with him only as he was chosen as the King of Summer (the one circumstance under which priestesses are allowed to sleep with men). Her father asks the Goddess for proof, and Eilan falls down dead. Caillean takes Gawen with her back to the new community she has founded in Summer Country, also known as Afallon.

More summaries and resources for teaching or studying The Forest House.