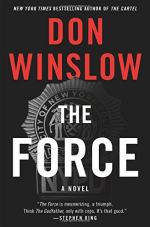 Get The Force from Amazon.com
View the Study Pack
Study Guide
Order our The Force Study Guide

Winslow, Don
This Study Guide consists of approximately 53 pages of chapter summaries, quotes, character analysis, themes, and more - everything you need to sharpen your knowledge of The Force.

The Force Summary & Study Guide includes comprehensive information and analysis to help you understand the book. This study guide contains the following sections:

This detailed literature summary also contains Quotes and a Free Quiz on The Force by Winslow, Don.

The following version of this book was used to create this study guide: Winslow, Don. The Force. New York: Harper Collins e-books, 2017. Kindle.

The Force starts with a pre-prologue called “The Last Guy” that introduces Denny Malone as the last guy anyone would ever expect to wind up in federal prison. Malone is the leader of the best team in the most elite unit of the NYPD, the Manhattan North Special Task Force, and he is a dirty cop.

The prologue, “The Rip,” skips back a year to July 2016. Denny and his partners, Russo, Monty, and Billy, raid the apartment of a big dealer, Diego Pena. They break into the room without any injuries, except for Billy, whose face is badly cut up from a grenade. They find 100 kilos of heroin and $five million in cash. Pena tries to strike a deal with Malone, but Malone shoots him without provocation and then steals the money and heroin. Pena’s dog breaks loose off its chain and lunges at Billy. Malone shoots the dog, but not before it knocks a large brick of heroin into Billy’s bleeding face and makes him OD.

Part 1, “White Christmas” begins on Christmas Eve. The city is full of racial tension because of the Michael Bennett shooting, in which a 14-year-old boy was shot by a cop. Malone wakes up at the house of his mistress, Claudette, who is black and addicted to heroin, and then gets into a fight with his wife over the phone. He walks to work and meets with Captain Sykes, who wants more heroin arrests for his numbers. Captain Sykes also wants Malone to stop a drug lord, DeVon Carter, from purchasing a large amount of guns that will be used to start a war with the Dominican gangs. Malone asks his informant, Nasty Ass, where to find Fat Teddy, who works for DeVon Carter. When Malone finds Fat Teddy, he arrests him for heroin and gun possession.

Once Fat Teddy is booked and in a cell, Malone goes in and asks who DeVon is going to buy the guns from, and Fat Teddy says that he is planning to buy them from a white supremacist gang from the South. Fat Teddy also says that a cop, Torres, is working for DeVon Carter. Malone gives Fat Teddy the number of a lawyer, Piccone, who will get him off. Malone returns to Claudette’s house, sleeps for an hour, and then wakes up and takes pills and goes to open presents with his wife and children. After that, he goes to Russo’s house, and then meets with Piccone, who gives Malone money for referring Fat Teddy to him. Piccone then asks Malone if he will help deliver money to buy the case in exchange for a cut, and Malone agrees.

Part 2, “The Easter Bunny,” takes place three months later. An old woman has been shot, an innocent victim in the war between DeVon and the Dominicans, which are now being ruled by Carlos Castillo. Captain Sykes tells Malone to find the killer, and then puts a new kid, Levin, on his team to replace Billy. The team makes a raid on one of the project towers in order to find suspects, and Levin captures Odelle Jackson, who has the gun that shot the old woman. Jackson is just a lookout, and Malone forces him into giving the name of the real shooter. The team goes out to celebrate Levin’s arrest. At the end of the night, Malone walks back to his apartment but is picked up by the feds. They have a tape of Malone’s meeting with Piccone. and they want Malone to give them information on corrupt judicial employees in exchange for ignoring the evidence on the tape. Malone is given a day to decide, so he goes to work where he is confronted by Claudette, who has relapsed. Malone thinks that she will die without him, so he agrees to the deal, but stipulates that he will not rat on any cops, only lawyers.

Malone goes to a hearing for an old case, but the defense attorney, Gerard Burger, reveals that Malone had planted machine guns on the defendants. The feds find out about this, and tell Malone that he has to give them names of dirty cops or they will arrest him and his partners. Malone agrees. The team sets up surveillance on DeVon and Levin finds out that Fat Teddy is handling the gun purchase. They ambush Fat Teddy and take his place, so that they buy the guns from the white supremacists, and then they arrest them. The whole force goes out to celebrate, but Malone is depressed because he is a rat.

Malone tapes Torres, the most corrupt cop on the force, and hands the tape to the feds. Soon after, Torres kills himself and rumors start to fly. At the funeral, the widow tells everyone that Malone ratted on Torres, but Malone manages to convince everyone that this is a lie. Malone’s team wants to sell the heroin from the Pena bust, so Malone goes and sells it to Savino, a mob boss. Savino betrays him, however, and brings Castillo, who is Pena’s cousin and is not happy that Malone killed Pena and stole his heroin. The next day, Malone meets with Savino and his boss, Bruno, and Bruno reveals paperwork that proves Malone is working with the feds. Malone escapes and goes to the feds, who offer to put him in the witness protection program in exchange for information on the mob family. Malone agrees, and gives testimonial that affects everyone in city hall, all the way up to the mayor. At home, Malone is attacked by an assailant sent by Castillo, but he is saved by his partners. They set up surveillance on Castillo. Malone meets with the most powerful man in New York, a rich land developer named Bryce Anderson, and convinces him to call off the federal investigation because it will cause too much chaos in the political sphere. Anderson agrees, and Malone almost feels safe. But then the feds come and arrest him because Savino turned and gave Malone up as a heroin dealer and a thief.

In Part 3, the feds tell Malone that they will arrest his wife unless he turns on his partners, so Malone agrees. He gets Monty and Russo on tape, but they suspect him of wearing a wire. They nearly shoot each other, but then the feds plant a fake story that Levin is the rat. The team gets a call that Castillo is on the move, so they go to bust him, letting Levin walk in first so that he will get shot. They walk into an ambush and Levin is killed and Monty is irreparably injured. Malone confesses everything to Russo, and then to his wife, and they both hate him for what he has done. The ruling on the Bennett case comes out and the shooting police officer is found innocent. Malone and Russo turn themselves into the feds, and then Russo turns on Malone and says that Malone killed Pena in cold blood.

The city starts to riot because of the Bennett case, and city hall learns that there is a video of the shooting that DeVon has and is threatening to release. They tell Malone that they will drop his charges if he gets the tape. Malone goes to get the tape, but finds Nasty Ass has been beaten and strung up by DeVon because he thought Nasty Ass had helped Malone stop his gun purchase. Malone takes Nasty Ass to the hospital, where he dies, then goes and gets the tape from DeVon and kills him. Then Malone goes to city hall and asks them to reinstate him in exchange for the tape, and when they agree he tells them that he has released the video and that they are all corrupt. One of the feds, O’Dell, tapes the whole thing and sends it to Washington. Malone follows Torres’s old team, who is meeting with Castillo. He kills them all and steals the heroin he sold back. He dumps it in a river and then dies.

More summaries and resources for teaching or studying The Force.

The Force from BookRags. (c)2022 BookRags, Inc. All rights reserved.