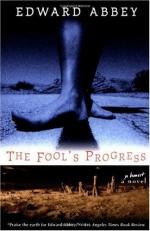 This detailed literature summary also contains Topics for Discussion and a Free Quiz on The Fool's Progress: An Honest Novel by Edward Abbey.

The Fool's Progress by Edward Abbey is a pseudo-autobiographical novel of Abbey's own life. Henry Lightcap, the main character of the story, is an alcoholic who has spent much of his life meandering from woman to woman and place to place without steady employment or a sense of true identity. The novel begins in Arizona with Lightcap's wife, Elaine, leaving him. Elaine is not the first to leave Lightcap in his life, and he reveals she is in fact one of many woman who has left him behind because of his drinking, his general attitude, his waywardness and his drunkenness. Lightcap sets out with his dying dog to return to the place of his birth in the Appalachian mountains, Stump Creek, where much of his family still lives.

Over the course of the novel, as Lightcap travels across the country, the reader is treated to flashbacks that allow the reader a deeper understanding of Lightcap's character. The story tells of his friends, who often support Henry in his life choices because those choices fit with their own. His friends destroy a homestead he is charged with keeping during a housewarming party, for example. Others support his drinking, knowing he is a severe alcoholic. Still others help him to find employment that allows him the freedom to not settle down.

While Lightcap is a womanizer and an alcoholic, the reader comes to realize that the man has suffered tremendously throughout his life. He has loved many woman and always tries to do his best, but his inability to stay in one area and his addiction to alcohol and women often disrupt his noble plans. He holds positions as a forest ranger for half of the year and wanders the country the other half. His most beloved woman and second wife, Claire, seems to be his soul mate, although she is his junior by decades. They marry, and she supports his part-time employment status and seems to enjoy their wandering life together. She gives birth to their child in a remote cabin but begins to hemorrhage. She dies in a car accident as Lightcap attempts to drive her to a hospital. The child, a daughter, is taken by Claire's mother and is never seen by Henry.

From that point forward in life, Henry uses alcohol and other woman to hide his loneliness and despair. He marries again, to Elaine, but following a drunken binge, he is hospitalized. He learns at the hospital that he is dying of pancreatic cancer, which has no cure. He does not tell his wife, who soon leaves him. At the end of the novel, readers finally understand that Henry is going home essentially to die. The novel is heart wrenching, humorous, dramatic, and intense from beginning to end. Beautifully written, using traditional Edward Abbey attention to detail in nature, the novel not only presents a breathtaking view of the United States nearly from coast to coast, but also presents a comprehensive examination of one man and how his actions in life affect the outcome of his existence.