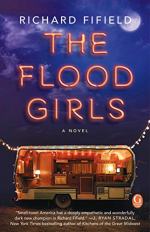 Fifield, Richard
This Study Guide consists of approximately 68 pages of chapter summaries, quotes, character analysis, themes, and more - everything you need to sharpen your knowledge of The Flood Girls.

Jake is Quinn's most flamboyant resident. Instead of preferring hunting and drinking like most of the men and boys in Quinn, Jake has a love for fashion. He spends most of his time at thrift stores, searching for the perfect outfit for himself. He also loves styling and fashion, and longs for an adult life that lets him pursue fashion with more acclaim -- and less ridicule.

Aside from fashion, Jake loves to read exotic books and listen to pop music. Jackie Collins books, in particular, hold a particular appeal to him since her characters are so different than the people of Quinn. Pop music, particularly Madonna, also lets him live out his fantasies. Since a boy with a love for fashion and flair is not easily accepted in Quinn, Jake turns to these other outlets for escape.

Despite his affinity for these extravagant things, Jake is saddened...

More summaries and resources for teaching or studying The Flood Girls.