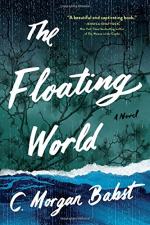 C. Morgan Babst
This Study Guide consists of approximately 51 pages of chapter summaries, quotes, character analysis, themes, and more - everything you need to sharpen your knowledge of The Floating World.

This detailed literature summary also contains Quotes and a Free Quiz on The Floating World by C. Morgan Babst.

The following version of this book was used to create this guide: Babst, C. Morgan. The Floating World. Algonquin Books of Chapel Hill, 2017.

C. Morgan Babst’s The Floating World explores the emotional aftermath of Hurricane Katrina. The novel is told from the various perspectives of the members of the Boisdoré family, all of whom struggle with interpersonal difficulties as they recover from the physical destruction of New Orleans. The novel moves back and forth in time, with most chapters timestamped as one specific day before or after Katrina made landfall. For the sake of clarity, this summary will set forth a linear chronology of the novel’s events.

Despite the mandatory evacuation order, thirty-two-year-old Cora Boisdoré refuses to leave New Orleans as Katrina approaches. Cora’s father, Joe, her mother, Tess (Eshleman), and her grandfather, Vincent, travel to Houston to wait out the storm while Cora and Troy, her co-worker, hunker down in the Boisdorés’ house. The trauma of being abandoned by Troy outside mid-way through the storm marks the beginning of Cora’s psychological decline. Even so, she assists Troy in rescuing stranded survivors by pirogue, including an elderly family friend, Ida Randsell. Cora also assists in rescuing Troy’s mentally ill sister, Reyna, and Reyna’s two young sons, then helps to care for the boys after Troy hands his sister over to medical authorities. Troy thereafter drives Illinois with the boys in Cora’s Jeep.

Meanwhile, Reyna escapes from her caretakers. In search of her sons, she finds her way to the Boisdoré house. As Cora sleeps, Reyna steals the Boisdoré shotgun, returns to her house, and takes her own life. Whether or not Cora had a hand in Reyna’s death remains an open question until the novel’s conclusion, even for Cora herself, who visits Troy’s house at his request to discover Reyna shot dead with the Boisdoré shotgun. (Cora will relive this trauma nightly for much of the novel, leaving her bed to compulsively visit Reyna’s unburied corpse.)

Joe, Tess, and Augie Randsell, Ida’s son, return to New Orleans to retrieve Cora sometime in the month between Hurricane Katrina and Hurricane Rita. They discover that their daughter has been living with Ida Randsell and remains in seemingly good spirits. However, en route back to Houston, Mrs. Randsell dies peacefully. Cora thus begins the precipitous decline that leaves her bedridden, anorexic, and catatonic: the elderly woman’s death, in conjunction with Reyna’s, suggest to Cora that all of her post-Katrina heroism had been for naught, that “help gets you fucked” (p. 207).

As Katrina and Rita ravage New Orleans, the Boisdorés’ younger daughter, Del, watches the news coverage from the safety of New York City. Enraged by the overt racism of the official response and worried about her sister’s ill health, Del seeks drunken comfort by sleeping with her best friend, Zack. Del flies to New Orleans the following morning and arrives to find her parents living separately: Joe with Vincent in the Boisdoré cabin, Tess with Cora in the house of family friends. The Boisdoré family home where Cora and Troy weathered Katrina is now uninhabitable, a massive magnolia having been uprooted and thrown into the house during the storm.

This literal “broken home” presages the ultimate dissolution of Tess and Joe’s marriage. Several factors develop/emerge over the course of the novel which contribute to the Boisdoré parents’ estrangement: their starkly different social and racial backgrounds; the strain of managing Vincent’s rapidly advancing dementia; Joe’s inability to rescue Cora in the days immediately following Katrina; and Tess’s ongoing infatuation (and eventual infidelity) with Augie. The revelation of this affair finalizes the Boisdorés’ separation and prompts Joe to burn his wooden sculptures of Tess in a symbolic bonfire.

Del also sets a major fire, though hers is toward a practical end. Days after Del arrives in New Orleans, Troy’s cousins show up at the Boisdoré family home to return Cora’s Jeep. Del gives them a ride to Troy’s house, where the three of them discover — and then unceremoniously desert — Reyna’s decomposing corpse. Once Del begins to suspect that Cora might have murdered Reyna, she sneaks back in to Troy’s house and sets fire to it, thus incinerating any evidence of her sister’s perceived crime. Cora leaves town the next day, unannounced, and drives to Illinois to join Troy and Reyna’s orphaned sons. When Tess visits Cora at the novel’s end, she finds that her daughter has started to gain weight and has fully regained her mental faculties. Cora expresses reluctance to return to New Orleans, feeling at “home” with her makeshift family (370).

Del, on the other hand, decides to give up her career in New York and stay in New Orleans (soon to be joined by Zack). Before moving away for college, Del had apprenticed with Vincent, and she comes to understand by the novel’s end that making furniture in her hometown is what she was “meant to do” (360). Whether or not Del will be able to study with her grandfather remains ambiguous, however; though Vincent is still a master of his art, the penultimate chapter finds him preparing to make “the slow, gray passage to the far and unseen shore,” suggesting either senility or death (368).

More summaries and resources for teaching or studying The Floating World.