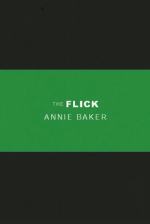 Get The Flick from Amazon.com
View the Study Pack
Study Guide
Order our The Flick Study Guide

Annie Baker
This Study Guide consists of approximately 33 pages of chapter summaries, quotes, character analysis, themes, and more - everything you need to sharpen your knowledge of The Flick.

Avery goes back to sweeping. Sam keeps watching the window as if he hopes [Rose] might appear again.
-- Stage Direction (Act 1, Scene 2)

Importance: This stage direction is important because when it’s enacted onstage, it indicates to the audience just how attracted Sam is to Rose, and how much he wants her to pay attention to him.

Well, it is kind of dinner money, because we’re so vastly underpaid and because Steve is a total douchebag and doesn’t have a credit card machine and is like totally fishy anyway with his finances and basically has like no idea how to run a movie theatre … Steve is like a compulsive gambler who doesn’t pay child support. He has like five kids somewhere in like Maine and his ex-wife is always taking him to court.
-- Rose (Act 1, Scene 3)

Importance: These lines indicate just how much Rose dislikes Steve. It also foreshadows the moment later in the play when...

More summaries and resources for teaching or studying The Flick.

The Flick from BookRags. (c)2023 BookRags, Inc. All rights reserved.