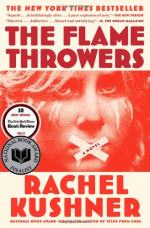 Rachel Kushner
This Study Guide consists of approximately 48 pages of chapter summaries, quotes, character analysis, themes, and more - everything you need to sharpen your knowledge of The Flamethrowers.

The Flamethrowers Summary & Study Guide includes comprehensive information and analysis to help you understand the book. This study guide contains the following sections:

This detailed literature summary also contains Quotes and a Free Quiz on The Flamethrowers by Rachel Kushner.

"The Flamethrowers" tells the story of a young woman known only as Reno (the name of her hometown) as she builds a new life and discovers her sense of self in both New York City and Italy. Reno’s story is intertwined with the story of Valera and his rise to becoming a powerful and wealthy industrial tycoon in early twentieth century Italy. The two main characters are tied together by Sandro Valera, Valera’s youngest son, who became Reno’s boyfriend when she moved to New York.

The novel opened with Valera murdering a German solider using a motorcycle headlamp during World War One. Reno’s story began when she travelled to the Bonneville Salt Flats in Nevada to complete a time trial on a motorbike with the intention of photographing the tracks in the salt as a piece of art. However, once she got there, Reno crashed her motorbike during the time trial. The novel from there flips back and forth between Reno and Valera's storylines. For this plot summary they will be condensed into one summary for each character.

Valera grew up in Egypt where he had an infatuation with a young woman called Marie who spurned him in favor of a Frenchman who had a motorcycle, triggering a lifelong obsession with the vehicles in Valera. As a young man, Valera moved to Milan where he began hanging around with a politically radical motorcycle gang. Valera and his friends all volunteered to fight for Italy in World War One and were assigned to a motorcycle battalion called the Arditi. Half of their battalion were killed in the war. Valera expanded his business into exporting rubber from Brazil during World War Two and the men employed to harvest the rubber were treated very badly.

Reno moved to New York to become an artist and struggled to find friends or a way to connect herself to a new city. Reno got a job as a receptionist at a film studio and became romantically involved with an older, successful artist called Sandro Valera. Sandro was an heir of the Moto Valera motorcycle company founded by Valera. Sandro arranged for the motorcycle Reno rode at the salt flats. After Reno crashed, she was taken in by the Valera Team who was there to set a new land speed record. They agreed to help her because she was Sandro’s girlfriend. They asked Reno to drive their car and set a new land speed record for women.

Reno set a new land speed record and became the fastest woman in the world. The Valera Team wanted her to come to Italy to do a promotional tour. Sandro initially objected to the idea but later relented. Sandro and Reno went to Italy together and Reno met Sandro’s family who were very rude to her. The Valeras were anxious because of the protests going on at their factory and throughout Italy. Reno caught Sandro cheating on her and left the Valeras with their groundskeeper, Gianni, who took her to Rome where a big demonstration was being held. Gianni was a member of the Red Brigade paramilitary organization and Reno helped him with his work.

Reno returned to New York and discovered that Sandro had started a new relationship with a younger woman. Sandro’s brother was kidnapped and murdered by the Red Brigades and Reno felt guilty for the help that she had given them. During the blackout in New York City Reno rode her motorbike freely through the streets, while Sandro waited on a grounded plane for the lights to come back on.

In the final chapter, Reno recounted helping Gianni escape from Italy across the French border.

More summaries and resources for teaching or studying The Flamethrowers.

The Flamethrowers from BookRags. (c)2022 BookRags, Inc. All rights reserved.