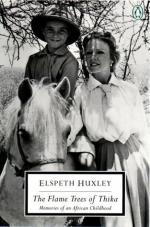 The Flame Trees of Thika: Memories of an African Childhood Summary & Study Guide

Elspeth Huxley
This Study Guide consists of approximately 29 pages of chapter summaries, quotes, character analysis, themes, and more - everything you need to sharpen your knowledge of The Flame Trees of Thika.

The Flame Trees of Thika: Memories of an African Childhood Summary & Study Guide includes comprehensive information and analysis to help you understand the book. This study guide contains the following sections:

This detailed literature summary also contains Topics for Discussion and a Free Quiz on The Flame Trees of Thika: Memories of an African Childhood by Elspeth Huxley.

Elspeth Huxley, the author, and her mother Tilly arrive in Africa in 1913. Elspeth's father, Robin, has already arrived, having purchased the lease for a farm with plans to clear the land and grow coffee beans. Elspeth is immediately enamored with the land and is caught up with the people she meets and the animals. Though the region is often harsh and unforgiving, Elspeth thrives and dreads the time when she might be force to leave the country, returning to Europe.

Elspeth's father is something of a dreamer and is working the farm now after a series of failed business endeavors. Robin does not seem afraid to work and is putting his efforts into making the farm pay. One of the first orders of business is to find workers and Robin is dismayed to discover that the young men of the native tribes of the area have little interest in working, even for pay. He finally goes to a chief and promises to pay the chief for any men who will work. One of the men, Njombo, soon emerges as something of a spokesperson and becomes a friend to Elspeth. Robin continues to have trouble controlling his workers until he is told he should have a headman and Sammy arrives as part of the farm.

Elspeth is soon becoming acquainted with new neighbors who are also arriving with the hope of making farms in the region pay off. Among them are Lettice and Hereward Palmer who arrive with two Pekinese dogs and the story of having left their young son behind in Europe. Hereward is a former military man and Lettice later says she was not cut out for life in Africa. Elspeth likes Lettice who gives Elspeth a pony as s gift. Lettice says that a friend, Ian Crawford, selected the pony and it is soon evident that Ian and Lettice are involved in a budding romance. When war breaks out, Lettice tells Tilly that she cannot go through with leaving Hereward in favor of Ian because she fears that Hereward might sacrifice himself on the battlefield and that his skeleton would always stand between her and Ian. As it turns out, she does not have to make that decision because Ian is killed in battle. Another of the neighbors is Mr. and Mrs. Nimmo. Mr. Nimmo spends all his time hunting, leaving Mrs. Nimmo to fill her time as best she can and to manage the farm as best she can. There seems to be an emerging relationship between Mrs. Nimmo and another of the neighbors, Alec Wilson, who believes that the best way to make his farm succeed is to read everything he can find on the subject.

Elspeth is sent for a short time to stay with Ian's brother while Robin is taken into the military and Tilly is helping set up a hospital. She is soon reunited with Tilly and the two remain on the farm only a short time before returning to Europe.

More summaries and resources for teaching or studying The Flame Trees of Thika: Memories of an African Childhood.

The Flame Trees of Thika: Memories of an African Childhood from BookRags. (c)2022 BookRags, Inc. All rights reserved.