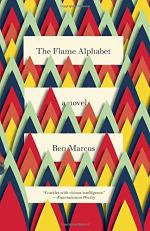 This detailed literature summary also contains Quotes and a Free Quiz on The Flame Alphabet by Ben Marcus.

The following version of this book was used to create this study guide: Marcus, Ben. The Flame Alphabet. Alfred A. Knopf, 2012. First Edition. The novel’s first-person narration moves backwards and forwards in time, beginning in the characters’ present, shifting into the past with descriptions of how the characters arrived at that present, and then returning to the present as the characters cope with the new, dangerous world in which they find themselves.

The narrative begins with a detailed, frantically paced, first-person description by protagonist Samuel of his evacuation from his home. As he describes his preparations and the unwillingness of his wife Claire to leave, he eventually reveals the reasons for the evacuation: the words of young people and children, including Samuel and Claire’s daughter Esther, have become poisonous to adults.

Samuel’s narration then describes how the situation progressed. First, he and Claire, like most other adults, became increasingly sick, often dying, as the words of children became more and more toxic. He describes how guidance from the leaders of his particular sect of Judaism inspired and instructed him on how to prepare medicines to combat that toxicity, medicines he tested on an increasingly reluctant Claire. There are also, Samuel comments, encounters with a man named Murphy, who encouraged his experiments and urged him to join forces with a community of researchers led by a man named LeBov, all determined to find a cure for the toxic language. Eventually, Samuel comments, the government-imposed quarantines, forcing parents to leave their children behind in an effort to reduce the effects of the toxic language by isolating its carriers.

As Samuel’s narration returns to the present, as he and Claire are leaving, she makes an attempt to get back to Esther. That attempt fails, and Claire is captured by security guards enforcing the quarantine. Rather than try to help her, Samuel drives off. His destination is a facility mentioned to him by Murphy, where he (Samuel) plans to join LeBov’s team of researchers.

When he finally arrives at Forsythe, Samuel undergoes a rigorous medical examination entirely in silence: it is no longer just the language of children that is toxic, but the language of adults as well. As he joins the research team, he is taken to meet LeBov, who, in spite of rumors suggesting his death, turns out to be alive and also turns out to be Murphy. Samuel then starts a months-long period of research, in which he tries to find alphabets and language that are non-toxic, but does not succeed. Eventually, LeBov becomes tired of his failures, and shows him that Claire has arrived at the facility. LeBov, who has been taking a mysterious serum that negates the toxic power of language, suggests to Samuel that Claire will be used as a test subject for the facility’s experiments unless Samuel cooperates with a particular avenue of research. Samuel agrees.

Samuel then discovers that LeBov’s serum comes from children, and after both a somewhat successful reunion with Claire and learning more about the nature of Forsythe’s work, Samuel manages to escape. He makes his long and difficult way back to the isolated hut in the woods where he and Claire practiced their faith, sets up a new life there, and waits for a chance to rescue Esther from quarantine. That chance comes, and for a while he takes care of her, having developed his own version of LeBov’s serum and having harvested some of its components from children.

One morning, Samuel returns home from a futile search for a child to harvest and discovers that Esther has disappeared. He settles in to wait for the return of both her and Claire, convinced that as a father and husband, it is what he has to do.