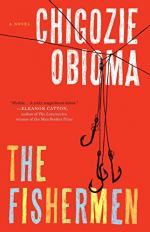 Chigozie Obioma
This Study Guide consists of approximately 62 pages of chapter summaries, quotes, character analysis, themes, and more - everything you need to sharpen your knowledge of The Fishermen.

The Fishermen Summary & Study Guide includes comprehensive information and analysis to help you understand the book. This study guide contains the following sections:

This detailed literature summary also contains Quotes and a Free Quiz on The Fishermen by Chigozie Obioma.

The Fishermen starts as a fictional story about four Nigerian brothers who struck out on after-school adventures when their father took a job that required him to live out of town and their mother was busy tending to her shop in the market and the two youngest children. The story quickly soured when a madman's prophesy overtook the heart and mind of the oldest brother, leading to tragedy and downfall for the entire family.

Thirty-nine-year-old Ben narrates this story of his childhood. Ben was nine when his father left to work in Yola, but his older brothers -- Ikenna, Boja, and Obembe - were quite capable of filling in the gap. Father was the strict disciplinarian of the family, so with him out of town, the boys decided to try new things instead of studying and reading all the time as Father insisted. He wanted them all to have a Western education and had even plotted professional careers for them. They played football in the streets for a short time, but nothing got their interest as much as fishing in the Omi-Ala River.

The river was once the cultural center of the community and shrines were built in its honor. But when Christianity spread, the shrines were seen as evil, and thus the river as evil too. The boys were forbidden to go there because of all the murders and nefarious acts that occurred there. There was even a 6 a.m. to 6 p.m. curfew at the river to keep people from going there after dark.

Abulu was one of the characters who frequented the river. Half madman and half prophet, Abulu drove the town crazy with his accurate and unsolicited prophesies. To his credit, he used his vision to help the police solve a number of crimes. Abulu ran across Ben and his brothers one day and told the oldest, Ikenna, that he would die at the hands of a fisherman.

The madman's words drove Ikenna crazy. He grew suspicious of his brothers, after all, they were fishermen. Ikenna changed and became cruel to his brothers, especially Boja. Before long, a wedge of hatred separated the two. Enraged, the boys began to fight while Ben and Obembe watched from the house. They got scared and ran to find an adult to intervene. When they arrived back with a neighbor, Mr. Bode, they discovered Ikenna dead with a stab wound in the kitchen. A few days later, Boja -- presumed missing after the incident -- was found dead, floating in the family's well.

Naturally, the family was shaken by the double tragedy. Ironically, Ikenna, the one who brought on the newfound hatred of his brother by his actions, was given a proper burial. Boja, who took his own life, was cremated according to tribal superstition. Ben was sad, but Obembe took his position as the oldest brother very seriously and, at 11 years old, he set out to kill the madman who changed his family forever.

Obembe's focus on killing Abulu consumed him. Ben found Obembe's drawings of stick figures depicting different methods that could be used to kill the man. After hearing his mother talk about Abulu one day and how he tore apart their family, Ben decided to join Obembe in his mission. The longer the boys went without killing the man, however, the less interested Ben was in carrying through the plan. When Father began to talk of sending them to Canada after the first of the year, Ben was elated. Obembe, however, seemed dreadful because he knew he was running out of time to kill the man.

When the family held a memorial church service for both boys together, Abulu sneaked in to attend. That evening, Father disappeared from the house for quite some time. When he returned, he had a patch on his eye. He told the family he had sudden cataract surgery.

Ben backed out of the plan, but fearful of losing his brother's love and respect, asked to rejoin. Obembe revealed that he has altered their old fishing rods, tying a hook tightly onto the end. The boys sneaked out of the house while Father was out of town and attacked Abulu while he was sleeping under a tree at the river. They flogged him with their barbed rods, ripping chunks of his flesh and causing him much bleeding. The man fell into the river and died.

Mother was elated when she heard the news of Abulu's death. She knew about it before they even made it home from killing him. Knowing that the body was found much too soon, the boys began to panic. Obembe convinced Ben to run away with him to hide in the middle of the night. After hours on the run, Ben decided to turn around and go back home to face the consequences. Obembe went forward, but vowed to write to his brother.

The next morning, soldiers arrested Ben. Before his trial began, Father admitted to Ben that he had also tried to kill Abulu. He also told him that killing the man was a good thing. Ben was sentenced to manslaughter. He was too young for regular prison, but his crime was too serious for juvenile prison. To accommodate the special circumstances, he was held for six years with only visits from a prison priest. He was supposed to serve eight years but got out early due to a change in government policy. Ben was out of jail at age 16.

The story ended with Ben's return home. He got to see his little brother, David, and sister, Nkewm, and realized he is the big brother of the family. In a flashback, Ben recalled part of his trial testimony and he thought he heard Obembe returning. The end, however, is vague and it is not clear as to whether or not Obembe did actually return of if Ben's mind was just wandering.

More summaries and resources for teaching or studying The Fishermen.

The Fishermen from BookRags. (c)2022 BookRags, Inc. All rights reserved.