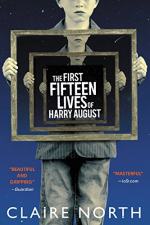 This detailed literature summary also contains Quotes and a Free Quiz on The First Fifteen Lives of Harry August by Claire North.

Harry August is a kalachakra: a species of humans who live the same life over and over again returning to their point of birth after every time they die. The novel opens at the end of Harry’s eleventh life when he was visited on his deathbed by a young girl, also a kalachakra, who came to warn Harry that the end of the world was coming and that it was getting faster.

Harry was born in the women’s restroom at Berwick-upon-Tweed train station in the North East of England in 1918. His mother was a kitchen maid in the manor house of the Hulne family. She was raped by Rory Hulne and then fired when the family discovered she was pregnant. Harry’s mother died during childbirth, so the Hulne family arranged for Harry to be adopted by their groundsman and his wife, Patrick and Harriet August. Harry’s first life was largely uneventful as he did not yet know that he was a kalachakra. When Harry died at the end of his first life and discovered he had been reborn into his second life, it drove him to madness and he committed suicide at age 7. When this failed to end the cycle, Harry spent his third life travelling the globe studying the world’s major religions, looking for answers which would explain his predicament.

In Harry’s fourth life, he married a woman called Jenny. Harry’s love for Jenny motivated him to tell her the truth about how he had been reincarnated and was now living the same life for the fourth time which meant he was able to predict the future. Jenny thought that Harry was mentally ill and he was taken to a psychiatric hospital and severely drugged. Harry was removed from the hospital by an American government agent called Franklin Phearson who noticed that Harry’s predictions about the future were accurate and believed that Harry was sane. Phearson told Harry about an organization called the Cronus Club, founded by people who were said to live their lives over and over again.

Phearson tried to use Harry’s knowledge of the future to change the course of history. Harry escaped and used the personal ads section of a newspaper to contact the Cronus Club and ask them to help him. Phearson recaptured Harry and began to torture him to get him to reveal what he knew about the future. A woman called Virginia from the Cronus Club visited Harry, helped him to commit suicide, and arranged to meet with him in his fifth life where she explained to him the history of the Cronus Club and admitted him as a member. She warned Harry never to reveal where and when he’d been born – his point of origin – because other kalachakra could use this information to kill him pre-birth and ensure that he is never reborn.

During Harry’s sixth life he met another kalachakra called Vincent, who became a close friend. During Harry’s twelfth life he sought to understand the deathbed warning that the world was ending which he had received in his eleventh life. He noticed technological advances that were happening at the wrong time in history and managed to track down the source of the problem to Soviet Russia, where he discovered that Vincent was altering the technological course of history. Vincent was trying to build a quantum mirror: a machine which would be capable of explaining everything in the universe. Harry initially agreed to help him but had second thoughts when he discovered that Vincent had murdered other members of the Cronus Club. Vincent tried to erase Harry’s memories and Harry committed suicide.

In Harry’s next three lives, he still retained all of his earlier memories despite Vincent’s ongoing attempts to erase them. Vincent believed he had been successful in erasing Harry’s memories and therefore revealed information to Harry which Harry could use to stop Vincent bringing about the end of the world. During Harry’s fifteenth life, after he saved Vincent from a radioactive accident, Vincent was touched by the strength of his friendship and told Harry things about his past that he had never told anyone else before. This gave Harry the information he needed to find Vincent’s point of origin, kill him pre-birth, and ensure that he was never reborn, thus stopping Vincent bringing about the end of the world.