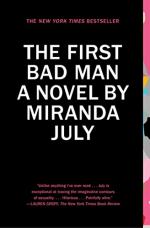 Related Topics
No One Belongs Here More Than You

Miranda July
This Study Guide consists of approximately 45 pages of chapter summaries, quotes, character analysis, themes, and more - everything you need to sharpen your knowledge of The First Bad Man.

This detailed literature summary also contains Quotes and a Free Quiz on The First Bad Man by Miranda July.

The First Bad Man by Miranda July begins with a look at the mindset and perspective of Cheryl Glickman, a woman past the middle of her life but certainly not near death. Cheryl narrates the story of how she came to have her son.

She was involved heavily with a self-defense course taught through her town, and managed to keep her time filled through her work with that organization. She was remarkably efficient - if a little awkward - in social settings. As the reader gets a look into her home life it becomes clear that Cheryl had a need for control, as she only used certain plates and dishes for food, organized her clothing and the like. She was constantly thinking about how her actions and choices were viewed by others, especially Phillip, a similarly-aged single man with whom she was more or less obsessed. Unfortunately, he was entirely uninterested in women in her age bracket, preferring those underage. Cheryl found herself in a strange position of power regarding Phillip's relationship with the 16-year-old Kirsten, one in which she equally reveled and found disgust.

The reader discovers that Cheryl suffered from Globus Hystericus, a type of strong anxiety, when she visited a psychiatrist to discuss her issues and the lump in her throat that she perceived to be associated with her anxiety. It was here that she first learned of the "adult" (sexual) games that this therapist played in order to gain some sort of self-fulfillment, games that she attempted to understand and emulated with her own home relationship. She had taken on a house-guest, although not exactly willingly as this guest was not very pleasant. Clee was the abandoned daughter of her coworker and acquaintance, a young woman who emulated the very opposite of the order that Cheryl had worked so hard to achieve in her own life. Clee was sloppy, vulgar and incredibly lazy. The two began a strange hate-filled relationship filled with uncontrollable violence between the two parties. Cheryl was able to reign in this violence under the pretense of an adult game where the two were re-enacting videos from the self-defense course, Cheryl as the assaulter and Clee as the assaultee. Clee was impregnated by an unknown male, and Cheryl agreed to help her raise the child.

The two were able to escalate their physical relationship to a sexual one, and leading up to the birth of the child and for some time after that the two were romantically engaged, much to the horror of Clee's parents who never expected nor desired this end result. Cheryl was able to let go of her control on her own life through this process, even after Clee stopped having sex with her and eventually left her with the child. She achieved a certain level of peace and serenity when pondering the nature of love and the innocence of the child.

The epilogue, taking place many years later, shows the joy and love between Cheryl and her son, how he refers to her and not Clee as his mother and what that means for her mindset.

More summaries and resources for teaching or studying The First Bad Man.