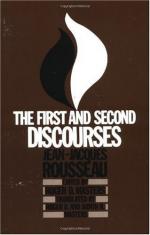 Roger Masters
This Study Guide consists of approximately 25 pages of chapter summaries, quotes, character analysis, themes, and more - everything you need to sharpen your knowledge of The First and Second Discourses.

The First and Second Discourses: By Jean-Jacques Rousseau Summary & Study Guide includes comprehensive information and analysis to help you understand the book. This study guide contains the following sections:

This detailed literature summary also contains Topics for Discussion and a Free Quiz on The First and Second Discourses: By Jean-Jacques Rousseau by Roger Masters.

Jean-Jacques Rousseau was among the most important philosophers of the 18th century and remains influential to this day both for his political philosophy and philosophy of education. In his day, he was widely known as an essayist, composer and a representative of Enlightenment thought. His work, following his death, went on to influence the French Revolution. His books Emile and The Social Contract were his most important philosophical works, the first setting out his philosophy of education and the second his political philosophy. He also wrote one of the first autobiographies in the modern period, along with a pre-Romantic novel, Julie.

The first Discourse, the Discourse on the Arts and Sciences, was a response to an essay contest which asked whether the development of the arts and sciences improved or corrupted human morality. The first Discourse won the contest and was Rousseau's first public success. In this Discourse Rousseau started his lifelong study of how civilization both corrupts and improves humanity.

Rousseau argues that the sciences and arts themselves throw virtue and enlightenment into conflict. Science contains great danger, since falsehood more often results from science than truth. Pursuing arts and sciences leaves the citizen idle and fails to teach him virtue. Enlightenment also often produces wealth and wealth always ruins morality. Wealth also destroys taste. When the arts spread, people are made to admire talent and reward people based on their public image. This produces inequality that is not tied to virtue.

Savage men inhabit the original state of nature, but in this period men are not much affected by their natural inequalities. However, civilization develops from the benefits of cooperation and then inequalities inevitably have great impact. The first important inequality is the inequality of wealth. The rich stand to lose their wealth if the poor attack them so they invent political power to protect themselves. However, if political power gets out of control, turning against rich and poor, it then enslaves all of its subjects and produces despotism.

More summaries and resources for teaching or studying The First and Second Discourses: By Jean-Jacques Rousseau.

The First and Second Discourses: By Jean-Jacques Rousseau from BookRags. (c)2022 BookRags, Inc. All rights reserved.