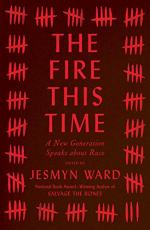 Summary
+Chapters Summary and Analysis
Part 1, “Homegoing, AD”
Part 1, “The Weight”
Part 1, “Lonely in America"
Part 1, “Where Do We Go from Here?”
Part 1, “The Dear Pledges of Our Love”: A Defense of Phillis Wheatley’s Husband
Part 1, “White Rage”
Part 1, “Cracking the Code”
Part 2, “Queries of Unrest”
Part 2, “Blacker Than Thou”
Part 2, “Da Art of Storytellin’ (a Prequel)”
Part 2, “Black and Blue”
Part 2, “The Condition of Black Life is One of Mourning”
Part 2, “Know Your Rights”
Part 2, “Composite Pops”
Part 3, “Theories of Time and Space”
Part 3, “This Far: Notes on Love and Revolution”
Part 3, “Message to My Daughters”
Important People
Objects/Places
Themes
Styles
Quotes
Topics for Discussion
Order our The Fire This Time Study Guide

Jesmyn Ward
This Study Guide consists of approximately 89 pages of chapter summaries, quotes, character analysis, themes, and more - everything you need to sharpen your knowledge of The Fire This Time.

The Fire This Time Summary & Study Guide includes comprehensive information and analysis to help you understand the book. This study guide contains the following sections:

This detailed literature summary also contains Topics for Discussion on The Fire This Time by Jesmyn Ward.

The following version of this book was used to create this study guide: Ward, Jesmyn. The Fire This Time. Scribner, 2016.

The Fire This Time includes seventeen essays and poems that are split into three sections, Legacy, Reckoning, and Jubilee. In the Legacy section, the essays touch on issues of ancestry and the past. “The Dear Pledges of Our Love…” and “The Weight” recount personal journeys toward better understanding black literary legends, specifically James Baldwin and Phillis Wheatley. Rachel Ghansah comes to realize that Baldwin is not that different from her grandfather even though Baldwin moved to France to escape racism and became a literary giant. Honorèe Jeffers understands that she must question history as it is presented to her, especially when black history is presented through the white gaze. Specifically, Phillis Wheatley’s life was potentially very different than popular sources suggest, especially when it comes to her husband. In both essays, the authors show how they somehow misunderstood aspects of the famous authors’ lives.

“White Rage” and “Where Do We Go From Here?” make connections between the past and the present, showing how history has repeated itself because systemic racism has not been dismantled. “White Rage” specifically argues that there has been a backlash for every major period of black advancement. Other essays, like “Cracking the Code” and “Lonely in America” in this section focus more on personal connections to the past. In “Cracking the Code,” Jesmyn Ward gets a DNA test to learn more about her personal and biological history. This is critical as genealogies are generally unavailable to people of color. In “Lonely in America,” Wendy Walters feels a deep and intense loneliness. She seeks out slave burial grounds in New England in order to find some connection to her past and face the horrors of slavery in the place she calls home.

In the Reckoning section, the essays range widely in their topics. In “Blacker Than Thou,” Kevin Young attempts to define blackness. He uses Rachel Dolezal as a prime example of what blackness is not. “Black and Blue” covers the tricky issue of walking while black. He compares and contrasts walking through the streets of Kingston as a black man to walking through New Orleans and New York in the same skin. “The Condition of Black Life is One of Mourning” has its assertion in the title and discusses the history of black grief as a result of a racist society. Rankine lauds Black Lives Matter as a voice calling for a national mourning, which would ideally have the effect of increasing empathy for black bodies. In “Know Your Rights!” Raboteau includes pictures of murals that help her understand how best to explain police brutality to her children. The murals, a symbol of love and activism, function as artful education. In “Composite Pops,” Mitchell Jackson defines father by giving examples from his own life. In doing this, he challenges popular stereotypes of black men.

In the Jubilee section, Daniel Jose Older writes a letter to his partner in which he expresses both love and allyship. He says he is angry; he is ready for revolution. Yet, his partner is more filled with fear, and Older understands and empathizes with that. Edwidge Danticat’s essay is at the end and expresses the desire for black joy. She calls for jubilee, which is for black people both celebration and freedom, and wants the same for her daughters.

More summaries and resources for teaching or studying The Fire This Time.

The Fire This Time from BookRags. (c)2022 BookRags, Inc. All rights reserved.