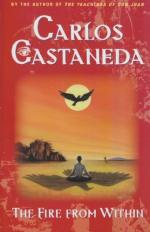 Plot Summary
+Chapters Summary and Analysis
Foreword and Chapter 1, The New Seers
Chapter 2, Petty Tyrants
Chapter 3, The Eagle's Emanations
Chapter 4, The Glow of Awareness and Chapter 5: The First Attention
Chapter 6, Inorganic Beings
Chapter 7, The Assemblage Point
Chapter 8, The Position of the Assemblage Point
Chapter 9, The Shift Below
Chapter 10, Great Bands of Emanations and Chapter 11, Stalking, Intent and the Dreaming Position
Chapter 12, The Nagual Julian
Chapter 13, The Earth's Boost and Chapter 14, The Rolling Force
Chapter 15, The Death Defiers
Chapter 16, The Mold of Man
Chapter 17, The Journey of the Dreaming Body
Chapter 18, Breaking the Barrier of Perception and Epilogue
Free Quiz
Characters
Objects/Places
Themes
Style
Quotes
Topics for Discussion
Order our The Fire from Within Study Guide

The Fire from Within Summary & Study Guide

Carlos Castaneda
This Study Guide consists of approximately 49 pages of chapter summaries, quotes, character analysis, themes, and more - everything you need to sharpen your knowledge of The Fire from Within.

The Fire from Within Summary & Study Guide Description

The Fire from Within Summary & Study Guide includes comprehensive information and analysis to help you understand the book. This study guide contains the following sections:

This detailed literature summary also contains Topics for Discussion and a Free Quiz on The Fire from Within by Carlos Castaneda.

The narrator has many extensive descriptions of his apprenticeship with the Mexican Indian sorcerer, don Juan Matus. He learns that there are three facets of a seer's knowledge: the masteries of awareness, stalking and intent. Don Juan Matus begins to teach the narrator about awareness, starting with the tradition of the ancient Toltec seers. The seers of the new cycle are not caught by death; they choose the moment of their departure from this world and are consumed by a fire from within, vanishing as if they never existed. The narrator goes to Oaxaca where don Juan sends him into a state of heightened awareness to prepare him for the final exercise which is necessary before warriors are considered fit to be on their own. Don Juan warns the narrator that it will take years to recall what he has learned on his left side. The narrator learns about petty tyrants after an encounter with la Gorda. He also learns the five attributes of warriorship and the difference between the known, the unknown and the unknowable. Don Juan teaches the narrator about the Eagle, the source of all sentient beings as well as the reason for the existence of sentient beings, to enhance awareness.

The narrator becomes angry and sad at the limitations of his being since he cannot remember his lessons while he is in normal awareness. Don Juan, don Genaro and the narrator go to the original setting where the original seers lived thousands of years ago, and don Juan teaches about the three levels of attention. People approach, intending to harm. Don Juan leads the narrator to don Genaro's house while don Genaro continues walking to misdirect the weird creatures. When don Genaro returns, he opens the door to let the creatures in, but the narrator does not see anything. The three seers leave quickly and go to don Juan's house. When the narrator asks for an example of the ancient Toltecs' practices, don Juan has him make a mirror and call an ally into it at the creek. The narrator is melancholy when he realizes that humans are truly nothing.

Since don Juan has finished his explanations, the narrator must now move his assemblage point unaided and align another great band of emanations. First, the narrator sees, appreciates and desires to worship the mold of man. The narrator assembles another world, and he and don Juan walk through a deserted plain of yellow dunes of sulfur. Next, he moves to the Black World. Don Juan insists that the narrator shift his assemblage point directly to the Black World since he will have to do so in several days to save his life, and the narrator accomplishes this feat. The narrator and two other apprentices, Pablito and Nestor, meet don Juan, don Genaro and the other members of the nagual's party on a mountain. The apprentices must intend to shift their assemblage point after jumping from the cliff. The narrator, Pablito and Nestor jump from the cliff, but they all manage to shift their assemblage points to assemble another world and escape. They are left to remember don Juan's teachings about heightened awareness and try to reassemble the lessons he taught them in order to achieve freedom.

More summaries and resources for teaching or studying The Fire from Within.

The Fire from Within from BookRags. (c)2022 BookRags, Inc. All rights reserved.