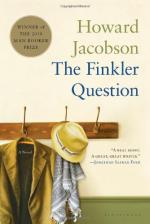 The Finkler Question Topics for Discussion

Why does Julian refer to Jews as "Finklers"?

What does Julian suspect about his mugging, and how do his friends and family react to his suspicions?

How does Julian feel about Jews, and how does he show this?

Why does Sam become involved with the ASHamed Jews, and how does he feel about Jews in general?

Describe Julian as a person. Would you want to be his friend? Why are Sam and Libor friends with Julian?

Why does Hephzibah lament the end of her relationship with Julian?

Why does Libor commit suicide?