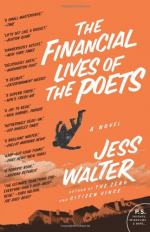 Related Topics
We Live in Water
The Cold Millions

The Financial Lives of the Poets Symbols & Objects

Jess Walter
This Study Guide consists of approximately 81 pages of chapter summaries, quotes, character analysis, themes, and more - everything you need to sharpen your knowledge of The Financial Lives of the Poets.

This watch symbolizes Matt's power, which it turns out he never had in the first place. Matt is given a watch from the police and is told it is a recording device but, in actuality, it is just a watch. When Matt first receives the watch he is filled with a sense of importance and power, thinking he can use the device to take down those he feels have wronged him. It turns out he never held any sort of power to begin with though; Matt's actions with the watch were meaningless.

Windows are used as a way to symbolize Matt's connection with his family. For example, when ruminating on his relationship with his father he always hopes he can be better to his sons than his father was to him. At one point Matt's dad is starting out the window and Matt looks...

More summaries and resources for teaching or studying The Financial Lives of the Poets.

The Financial Lives of the Poets from BookRags. (c)2022 BookRags, Inc. All rights reserved.