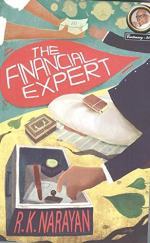 This detailed literature summary also contains Quotes and a Free Quiz on The Financial Expert by R. K. Narayan.

In The Financial Expert, Narayan tells the story of a man named Margayya as he develops from a small-time moneylender into the wealthiest member of the village of Malgudi, only to lose it all at the end of the novel. The novel is divided into five parts. In Part One, Margayya lives with his wife and young son. He works under the banyan tree, helping poor members of the community find loans and taking a small cut for himself. He desperately wishes to become wealthy and visits a priest, who tells him to pray to the Goddess Lakshmi. He does so and soon meets Dr. Pal, who has written a sociology book to improve married couples’ sex lives. In Part Two, Margayya arranges to print and distribute the book, which sells extremely well. Part Two ends when Margayya manages to buy his way out of the publishing deal.

In Part Three, Margayya takes his check to the bank, where he is able to invest it. Meanwhile, as his wealth grows, Margayya worries about his son, who is showing no aptitude for school. Despite tutors, Balu has failed the entrance examinations to university three times. Finally news arrives that Balu has been killed in Madras. Margayya goes to investigate where he discovers that Balu is still alive. Overjoyed at the sight of his son, Margayya brings him home and tells him not to worry about school.

In Part Four, Margayya arranges for Balu to marry the daughter of a wealthy tea-plantation owner. They marry and Margayya moves them into a nice house in Lawley Extension. In Part Five, Margayya has become a prominent member of Malgudi’s community. He rejects all requests from charities for a donation. Balu comes to him one day asking for his share of the family wealth. Margayya is shocked and learns that Dr. Pal has encouraged Balu to do this. Margayya goes to confront Balu, and finds Dr. Pal there in a nice car, along with two girls from the theater. Margayya, upset, loses control and fights Dr. Pal, who takes revenge by turning all Margayya’s clients against him. By the end of the next day, Margayya has no money left. He decides that he will return to the banyan tree the next morning.