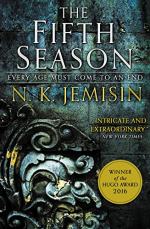 This detailed literature summary also contains Quotes and a Free Quiz on The Fifth Season by N. K. Jemisin.

The following version of the novel was used to create this study guide: Jemisin, N. K. The Fifth Season. Orbit, August 4, 2015. Kindle.

In The Fifth Season by N. K. Jemisin, Damaya's search for acceptance is recorded through the three different lives she makes for herself as an orogene. Orogenes have the ability to stop shakes (earthquakes) and blows (volcanos). They can also cause these phenomena. These powers instill fear and hatred in the people of Stillness toward the Orogenes.

Damaya's family gives her away when she is a young child. Knowing her past makes Damaya determined to become a stronger person. She gives herself the orogene name of Syenite (Syen) after she passes her first ring test in the Fulcrum. The Fulcrum is a place where orogenes live and train. After learning just how cruel a life in the service of the Fulcrum can be, Syen imagines herself as Essun. As Essun, she is married and the mother of two children. Essun believes the curse of orogeny comes to destroy her life when her husband kills one of her children because he has determined that the child has orogenic abilities. At the end of the novel, the heroine is reunited with Alabaster, her orogene mentor. Alabaster sets off an earthquake that almost splits the continent. His intention is to destroy the world, and he asks Essun to help him succeed.

The author uses present tense to share the details of the lives of Damaya, Essun, and Syen. The three lives are interspersed so that the reader does not realize at first that these three personalities belong to the same woman at different points in her life. The novel begins with Alabaster’s act of splitting the continent and the chaos that follows. At the same time, he is attempting to bring the world to an end, Essun has discovered that her husband has murdered their young son because he is an orogene.

The heroine’s story begins when she is a child, named Damaya. When her parents realize she is an orogene, they have the leader of their community contact the Fulcrum. The Fulcrum arranges for her to be taken away. Her parents believe she will be killed. They are surprised when they learn she will be trained as an Imperial Orogene. Even though her Guardian, Schaffa, confuses her with gentle words but cruel actions, Damaya realizes he is the only one offering her any future. She takes it willingly and trains hard even though she is bullied because of her hard work. One day, Damaya meets Binof, a child of leaders who wanders into the Fulcrum hoping to find answers to a gap she has discovered in history. Damaya and Binof discover a hidden room that is the place where the obelisks are created in the main building on the Fulcrum property. Damaya’s reliability comes under question when she is found with the stranger in the hidden room. She is forced to take her first ring test with no preparation. She knows that if she fails the test she will be killed, a situation that she sees as unfair but one that she can do nothing about.

After Damaya passes the test, she is allowed to give herself the name Syenite (Syen). Syenite is a strong metal. Damaya hopes that as Syenite she will be stronger than Damaya had ever been. When Syenite has earned four rings, she conceives a child with a ten-ring orogene named Alabaster. Alabaster acts as a stud in the Fulcrum breeding program. As one of the strongest orogenes living, he has experience with life and with the way orogenes have been treated by other people and leaders of the Fulcrum. As a result, Alabaster is cynical and jaded.

On one of their first duties, Syen and Alabaster are sent to Allia to clear the harbor of an overgrowth of coral. Things go wrong from the start. Alabaster is poisoned their first night in Allia. It is only because he is able to pull power from a nearby obelisk floating in the sky that he survives. Syen must go alone to clear the harbor and discovers right away there is something other than just coral blocking it. She tries to get the people of the town to conduct a study to determine exactly what is causing the blockage, but they refuse to do so. When Syen uses her orogenic power, it turns out the object is a broken obelisk that had been trapped under the water. After she raises the obelisk, it hangs only ten feet above the water. Obviously, it is not working properly.

Syen and Alabaster are ordered to remain in Allia where an angry Guardian tries to kill them, Syen uses the power of the broken obelisk to open a volcano that destroys the town. Alabaster and Syen are saved by a stone eater, a strange kind of person who has been a companion to Alabaster for years. This stone eater takes them to the island of Meov where they start a new life, free from the Fulcrum’s rules. Syen and Alabater have a baby who turns out to have strong orogenic powers. They find a place for themselves among the people who live there.

During a pirating mission with others from the island, Syen asks to be taken to see up close the damage she did to Allia. Surprised the Fulcrum has allowed the volcano to continue to spew ash and magma, Syen uses her power to make it dormant. It is too late when she realizes that the Fulcrum left the volcano active as a trap. A few weeks later the island is attacked by Guardians. Rather than letting the Guardians take the baby she had with Alabaster Syen kills it. She believes that he will be better off dead than living in the Fulcrum. Alabaster is taken by the stone eater, and Syen is believed by the Guardians to be dead.

Surviving islanders find Syen and take her to the mainland where she winds up in Tirimo. She lives there for ten years as Essun, eventually finding peace again when she marries and has two children. When her son is murdered, Essun takes off in search of her husband and remaining child. It is at this point that she is drawn to a community called Castrima where she sees Alabaster again. It is under these circumstances that he asks her to finish his undertaking of ending the world.