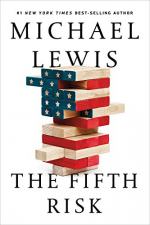 Michael Lewis
This Study Guide consists of approximately 62 pages of chapter summaries, quotes, character analysis, themes, and more - everything you need to sharpen your knowledge of The Fifth Risk.

This detailed literature summary also contains Topics for Discussion on The Fifth Risk by Michael Lewis.

The book’s narration is primarily objective and research-based, but there are moments at which the author inserts first-person commentary and analysis.

The book begins with a Prologue that outlines how the team behind the election of Donald Trump in 2016 generally failed to understand the need for an effective transition out of the Obama administration and into that of the new president. The Prologue’s focus is on the experience of Chris Christie, a former governor of New Jersey who, after a failed attempt to win the Republican nomination for president, went to work for the Trump campaign. The author describes how Christie struggled first to make the Trump team aware of both the need to prepare for a possible transition and the responsibilities associated with meeting that need. After Trump’s election, the author reports, Christie was quickly replaced, leaving the transition team in chaos and one of Trump’s advisors, Steve Bannon, convinced that the president-elect did not care what happened next.

Also in each of the book’s three parts, the author outlines each Department’s range of responsibilities. As he does so, he also offers evidence of just how important science is to each Department’s interaction with those responsibilities. He offers insight and commentary from a range of scientists who, in turn, offer analysis into the importance of their, and their Department’s, particular way of applying scientific principles and knowledge to improving the lives of the American people.

In Part 1, Author Lewis outlines how policies and practices in the DOE changed after the arrival of its new secretary, former Texas governor Rick Perry. The author then considers the operations of the Department from the perspective of one of its employees, John MacWilliams, who worked for the Department under the supervision of Obama’s secretary of energy, a nuclear scientist named Ernie Muniz. MacWilliams’ particular expertise was on risk assessment and management. In conversation with the author, MacWilliams outlines what he sees are the five biggest risks facing the United States and its government. The fifth risk, he says, is poor project management.

In Part 2, the author outlines how policies and practices in the USDA also changed after the election of Trump and the installation of his administration. Those policies and practices are considered from the perspectives of three different former employees, scientists and businesspeople all of whom, again, recognize the importance and value of science to the successful, responsible functioning of the Department.

In Part 3, author Lewis focuses his narrative and thematic attention on the Department of Commerce. Most specifically, he considers the function and responsibilities of the NOAA (National Oceanic and Atmospheric Administration) which is responsible for, among other things, the collection and distribution of information about the weather. Consideration of this particular aspect of the DOAA’s function leads the author and the scientists he quotes to consideration of the value of data in general, and to the different ways that the public responds to communication of that data. The author focuses his consideration of this aspect of the NOAA’s function through the lens of storm watching – specifically, the tracking and forecasting of tornados. He considers the different ways of warning the public about a tornado’s watch and considers the reasons why so many members of the public have not paid attention to such warnings. He concludes the book with an implied, metaphoric comparison of the danger and unpredictability of tornados to the danger and unpredictability of Donald Trump.

More summaries and resources for teaching or studying The Fifth Risk.