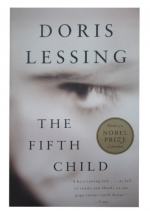 Doris Lessing
This Study Guide consists of approximately 29 pages of chapter summaries, quotes, character analysis, themes, and more - everything you need to sharpen your knowledge of The Fifth Child.

This detailed literature summary also contains Topics for Discussion on The Fifth Child by Doris Lessing.

This short novel is the metaphor-rich story of a traditional family torn apart by the arrival of an angry, violent, destructive child. As parents Harriet and David struggle to hold together both the family and their own personal values, the narrative draws implied metaphorical parallels between that family's particular experience and the experiences of society in general, along the way also exploring the issues of idealism vs. practicality and the relationship between society and those society perceives as different.

The narrative begins with a description of how the similarly watchful Harriet and David meet at a rowdy office party, immediately realize that they are very much kindred spirits, and make plans to marry and have a large family. Those plans come to fruition sooner than they plan when, on the day they complete the purchase of the large home they want to fill with children, they make love and Harriet conceives their first child.

After convincing David's divorced parents and Harriet's widowed mother to support their plans, Harriet and David expand their family at a rapid rate, bring four children (Luke, Helen, Jane and Paul) into their home in quick succession and with relative ease. As the family grows, so too does the list of the family's guests during summer, Easter, and Christmas vacations. Harriet's fifth pregnancy, however, is much more difficult than the other four, and she finds herself in such near-constant pain that the large family celebrations have to be postponed. When the fifth child is finally born, his strength, anger, and capacity for violence, even when he's nursing, alienates everyone, including his mother. Nevertheless, he is named Ben and is offered as much love, support and time as his siblings. Ben's violent and destructive nature, however, makes him unable to accept those offers. Eventually, Harriet reluctantly allows him to be taken from her and placed in an institution. For a while the family is happy, but Harriet misses her son too much and, over David's objections, retrieves Ben from what she believes to be a life of inevitable, painful suffering and death.

It takes a while for Ben to readjust to life back home, and for his siblings to readjust to having him there. He eventually becomes as much a part of the family as he can be, learning to speak and to get along with his brothers and sisters. They, however, never fully adjust to having him around and, one by one, make arrangements to attend boarding school and/or live with their grandparents.

As Harriet's life becomes more and more defined by taking care of Ben, David's life becomes more and more independent of the life lived at home. Occasional attempts to recapture the closeness and intimacy he and Harriet once shared inevitably end in failure, recrimination and sadness. Ben, meanwhile, starts school and makes a couple of friends that, much to the relief of the family, take him away from the house for increasingly lengthy periods of time.

Years later, when Ben enters secondary school, the family's home life is virtually gone, with only Harriet being there regularly. Ben, meanwhile, becomes involved with a gang of teenaged boys who, like him, have difficulty functioning in school. Soon they are spending more and more time on the streets, as well as more and more time sponging off Harriet. David, meanwhile, strives to convince Harriet to move out of the house and give up on the dream of a large extended family. Eventually she agrees, also coming to accept the inevitability of Ben being fully absorbed into his gang, finding a violent and self-sufficient home of sorts with them and others of their kind in other cities, or other parts of the world.

More summaries and resources for teaching or studying The Fifth Child.