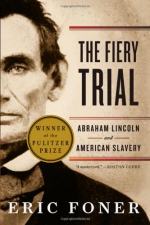 This detailed literature summary also contains Topics for Discussion and a Free Quiz on The Fiery Trial: Abraham Lincoln and American Slavery by Eric Foner.

The Fiery Trial: Abraham Lincoln and American Slavery is a nonfiction book by writer Eric Foner. In this book, Foner examines Lincoln's thoughts and attitudes toward slavery from early in his life up to the moment he signed the Emancipation Proclamation and beyond. While this book is not a biography, it takes a close look at Lincoln's career, specifically at his public life and the speeches he made concerning slavery throughout his career. The Fiery Trial is an interesting look at Lincoln's personal views and the difficult political position he found himself in as president during the Civil War.

This book takes a close look at the relationship between Abraham Lincoln and slavery. The author begins with Lincoln's early life, examining his home life and his home states and discusses how slavery was viewed in these states and how it most likely impacted Lincoln's views on slavery later in his life. Lincoln was born in Kentucky and would later married a Kentucky-born woman. Kentucky would be considered a border state during the Civil War, a state where slavery was a way of life for many years. Due to the state's attitude toward slavery, Lincoln's father moved the family to Illinois, a state that was considered free of slavery. However, although the purchase of slaves in Illinois was illegal, it still existed in the state in a simpler form during Lincoln's childhood, and the Black Laws of the state created a social atmosphere that also would have impacted Lincoln's opinions on the institution.

In Lincoln's early political career he voiced a distaste for slavery, but in his law career he is known to have represented slave owners and to have been party in at least one case that forced a woman once held in slavery to be returned to her owner. As Lincoln's career expanded and public sentiment against slavery grew, Lincoln became more vocal about slavery. Lincoln entered into debates against political rival Stephen A. Douglas in the 1850s in regards to slavery, often voicing the opinion that slavery should not be legal in new territories and that an expansion of slavery throughout the nation would be a mistake.

Lincoln was a loyal Whig during the majority of his political career, but found the Whig party changing in the 1850s. In time, Lincoln began to align himself with the new Republican party because their values were more like his own. This included the belief that slavery was wrong and should not be allowed to continue. Lincoln quickly became a leader in the new party, accepting the presidential nomination in 1860.

As he ran for president, Lincoln continued to voice his opinions against slavery. These opinions included the fact that slavery should be abolished, but Lincoln proposed that the end of slavery should come slowly. Lincoln also embraced the idea of colonization, the idea of sending freed slaves to other countries where they would be given land on which to make a new life for themselves. This controversial, but popular, solution to the question of the mixing of races in the aftermath of emancipation grew out of Lincoln's admiration of politician Henry Clay and stayed with him even in the White House.

Lincoln never wanted to abolish slavery with one stroke of the pen, but believed that it was an institution that should be phased out slowly. However, the Civil War and events surrounding it pushed Lincoln's hand and set the stage for him to sign the Emancipation Proclamation.