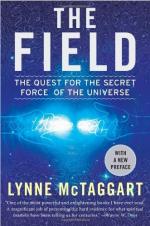 The Field: The Quest for the Secret Force of the Universe Summary & Study Guide

Lynne McTaggart
This Study Guide consists of approximately 30 pages of chapter summaries, quotes, character analysis, themes, and more - everything you need to sharpen your knowledge of The Field.

The Field: The Quest for the Secret Force of the Universe Summary & Study Guide Description

The Field: The Quest for the Secret Force of the Universe Summary & Study Guide includes comprehensive information and analysis to help you understand the book. This study guide contains the following sections:

This detailed literature summary also contains Topics for Discussion and a Free Quiz on The Field: The Quest for the Secret Force of the Universe by Lynne McTaggart.

Science has recently suspended disbelief and is open to the possibility that there may be such a thing as a life force. "The Field—The Quest for the Secret Force of the Universe" by Lynne McTaggart, is the account of the many physicists and other scientists who have worked for years to find that force and to fully understand man's impact on the universe and the untapped possibilities that exist in it for mankind. Scientists, including luminaries like Newton and Einstein, once thought that there was nothing, empty space, between the visible objects in the skies. The scientists whose work is chronicled in "The Field" dissent—their research and experiments have led them to believe that that nothingness, that field, is perhaps the most important element in space—one that can unlock the mystery of human consciousness and indeed life and death itself.

The Zero Point Field contains the invisible power of subatomic quantum particles. The Zero Point Field is so named because it is thought by scientists at the time to be the one region where there is absolutely no vitality nor energy. However, in more current times, that theory has been abandoned in favor of new findings, in particular the discovery of a sea of dynamic, low frequency quantum particles that reside in what was once considered that great "nothingness."

Research done by the physicists and researchers in this account point to the possibility that the Zero Point Field is unaffected by time or space and is the repository for everything that has ever taken place and everything that has been part of the universe. There is the potential that "blueprints" exist for every living creature that ever roamed the earth. The vast data that exists in The Field can be tapped by making a connection through the quantum waves that it emits. Man can make this connection by remote intention—the brain tuning into a frequency and receiving information via a quantum frequency wave. While the universe is chaotic and dynamic, The Field can be brought to order and quantum coherence by relationship. This essential order lends itself to the logical transference of data through its emissions.

The many years of work of the many scientists that have led down the path to the still evolving theories surrounding The Field are described in great detail in this book. The book begins with Astronaut Ed Mitchell returning from a trip to the moon. While his colleagues sleep, Mitchell, who is also an astrophysicist, is taking part in an ESP experiment—relaying messages through mental images to his colleague Dr. Rhine on earth. Mitchell is intrigued by the power of human consciousness and the potential it has to benefit mankind. As he flies silently back to earth, Mitchell feels he and the earth and the universe are all one.

Other physicists and scientists address the issue of human consciousness and man's connection to the universe in a myriad of ways. They explore the impact and powers of TM (Transcendental Meditation); biofeedback; biophoton emissions; quantum coherence; communication through quantum frequency emissions; clairvoyance; remote intention; collective intention and consciousness; and, many other concepts and approaches. However, although the scientists may have begun their travels down different paths, their work and research leads them all to the vast potential and possibilities that lie within the Zero Point Field.

More summaries and resources for teaching or studying The Field: The Quest for the Secret Force of the Universe.

The Field: The Quest for the Secret Force of the Universe from BookRags. (c)2022 BookRags, Inc. All rights reserved.