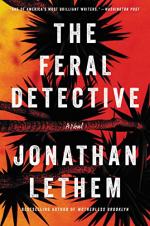 Jonathan Lethem
This Study Guide consists of approximately 37 pages of chapter summaries, quotes, character analysis, themes, and more - everything you need to sharpen your knowledge of The Feral Detective.

This detailed literature summary also contains Quotes and a Free Quiz on The Feral Detective by Jonathan Lethem.

The following version of this book was used to create this study guide: Lethem, Jonathan. The Feral Detective. New York: HarperCollins, 2018.

The novel takes place in January of 2017. The protagonist and narrator is Phoebe Siegler, a woman in her mid to late twenties. She lives in New York City, where she worked for NPR and then The New York Times. However, feeling disillusioned after the election of Donald Trump, Phoebe quit her job. At around the same time, a young woman named Arabella Swados suddenly dropped out of college, went to Los Angeles, and disappeared. Arabella is the daughter of one of Phoebe’s former coworkers, and Phoebe and Arabella had become friends. Phoebe goes to Los Angeles to look for Arabella.

In Los Angeles, Phoebe hires a private detective named Charles Heist, who is also known as the Feral Detective. Phoebe eventually learns that in the mountains and the desert near Los Angeles, there are two tribes of people living separate from mainstream society. The groups were founded in the 1960s and are known as the Bears and the Rabbits. Heist was born into the Bears tribe, but as a child, Heist defected to the Rabbits, who are generally less aggressive and violent. Heist then entered mainstream society. He now spends much of his time helping other people defect from the tribes.

While looking for Arabella, Phoebe and heist find two human corpses dies on the mountain, apparently ceremonially killed by members of the Bears. In an attempt to destabilize the Bears, Heist challenges their leader, Solitary Love, to a ritual fight to the death. The fight takes place at a Bear settlement in the Mojave Desert. Phoebe goes to covertly watch the fight, and she sees Arabella in the crowd. After Heist kills Solitary Love, Phoebe escapes with Arabella. Arabella explains that she was interested in how the Rabbits and Bears lived, and the Bears took her as a captive. Arabella returns home, and Phoebe prepares to rescue Heist, who is now a prisoner of the Bears.

More summaries and resources for teaching or studying The Feral Detective.