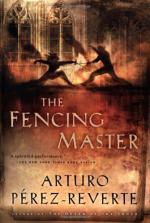 This detailed literature summary also contains Topics for Discussion and a Free Quiz on The Fencing Master by Arturo Pérez-Reverte.

The novel The Fencing Master is a story about an aging master of the art of fencing who finds himself involved in a murder mystery. The story begins in mid nineteenth century Madrid.

Don Jaime Astarloa is the most renowned fencing master in Madrid. He has dedicated his entire adult life to the art of fencing, and he has received a diploma form the most prestigious fencing academy in Europe. As Don Jaime ages, so too does people's regard for the usefulness of his chosen art. Don Jaime is saddened to see fencing relegated to the status of pastime or sport.

Most of Don Jaime's days are the same. He teaches his regular students in addition to one notable private student. His only activity aside from fencing involves visiting the Café Progreso where he observes friends make spectacles out of themselves in their passionate discussions about politics. The most boisterous member of the group is Agapito Carceles, a defrocked priest and sometimes journalist for minor newspapers. Carceles seems to delight in shocking the other members of the group, and Don Jaime enjoys watching the show.

Don Jaime's most notable student is Luis de Ayala-Velate y Vallespin, the Marques de los Alumbres. Don Luis is a known philanderer and a man who enjoys a good time. The two men have an unlikely friendship given their very different lifestyles. Don Luis hires Don Jaime not so much because he needs fencing instruction. Don Luis indeed must rely on his skills in fencing because he has the habit of upsetting jealous husbands, but Don Luis is already one of the finest swordsmen in Madrid. Don Luis hires Don Jaime because he enjoys practicing with a skilled opponent and because he enjoys Don Jaime's company.

All around Don Jaime is the news of one political intrigue after another, but Don Jaime is able to ignore them and focus on his art. Don Jaime has never had an interest in politics. His life's ambition is to invent an unstoppable fencing thrust and include it in a book he is writing about fencing.

Don Jaime's orderly and peaceful world changes with the appearance of the beautiful and enigmatic Dona Adela de Otero. The first time Don Jaime meets Dona Adela is when she summons him to her residence. Don Jaime is immediately struck by the woman's beauty and her traits of subtle aggression. Dona Adela wants Don Jaime to teach her a fencing technique that he invented many years ago but teaches only to select students. Don Jaime refuses on the grounds that he does not teach fencing to women.

Dona Adela is not the type of person to give up easily, and she continues to try to persuade Don Jaime. Eventually she succeeds, and Don Jaime discovers that in addition to being beautiful, Dona Adela is an incredibly skilled fencer. All the while his attraction to Dona Adela grows. Just as fast as she came into his life, Dona Adela disappears with little or no explanation. Soon after, Don Jaime learns that his friend Don Luis has been murdered.

Despite spending his entire adult life trying to avoid involvement in politics and intrigue, Don Jaime discovers that he alone is the only person that can solve a murder mystery.