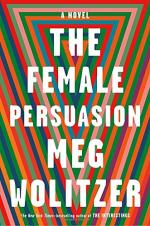 This Study Guide consists of approximately 81 pages of chapter summaries, quotes, character analysis, themes, and more - everything you need to sharpen your knowledge of The Female Persuasion.

This detailed literature summary also contains Quotes and a Free Quiz on The Female Persuasion by .

The following version of this book was used to create this guide: Wolitzer, Meg. The Female Persuasion. Riverhead Books, 2018.

Greer's first seven weeks at Ryland have been miserable for her. During that time, she has met Zee Eisenstat, a confident and attractive lesbian activist. The girls end up at a fraternity party one night, where Greer is assaulted by Darren Tinzler. Over the weeks that follow the incident, half a dozen other female Ryland students report similar encounters with Darren, and a disciplinary hearing is held. It is decided that Darren will be allowed to remain on campus.

Greer, having difficulty accepting the decision, speaks with Faith Frank following a speech given on campus. Faith advises Greer to let the situation go for fear that if she "seem[s] to be hounding this person, then sympathy will redound to him" (44) Greer takes this advice, and in so doing develops a reverence for Faith equal to that of Zee's for her idol. Surprisingly, Faith takes a particular liking to Greer and even gives her a business card.

"Twin Rocket Ships" shifts the novel's focus so that it is no longer directly on Greer, but on both Greer and Cory as they adjust to the obstacles being placed before them and their relationship.

Finding herself without any job prospects following graduation, Greer returns home to Macopee while Cory pursues an overseas opportunity in Manila as a financial consultant. Zee begins to work as a paralegal at the urging of both of her judge parents. Eventually, Greer works up the confidence to contact Faith Frank, whom she hasn't spoken to since their bathroom meeting at Ryland. In turn she is awarded a job in NYC working for Faith’s new foundation, Loci. Loci is funded by ShraderCapital, which is owned by multimillionaire Emmett Shrader, a close contact of Faith's from a former life.

Greer is completely in love with her new role in activism. Zee, contrarily, is exhibiting a vapid dislike for her job and its subsequent lack of activism. During an evening out with Greer, she nonchalantly hands her a letter intended to entice Faith to hire her. Struggling with her newfound purpose and desire not to share her new world, Greer ultimately makes the decision to withhold the letter from Faith, consequently denying Zee the job of her dreams.

Tragedy strikes, as Cory’s brother Alby is accidently run over by a car driven by his mother. As his mother verges on the brink of psychosis, Cory decides to stay home to take care of her and to assume her job cleaning houses. This creates a rift between him and Greer, causing them to part ways. As a coping mechanism, Cory turns to Alby’s video games. This significant interest leads him to eventually begin developing his own video game.

Meanwhile, Zee's dislike for her job has reached desperate levels and she has chosen to take a job teaching history to at-risk teens in Chicago. She has difficulty connecting with both the students and the staff until one of her students goes into labour and Zee is thrown into the act of delivering the child, alongside the attractive guidance counselor, Noelle Williams. They eventually admit their attraction to each other and go back to Zee's apartment together.

"I Get to Decide" focuses on Faith, taking us through her journey to female liberation. We are led from Faith’s conservative beginnings to her rebellious move to Las Vegas and back to New York, where she begins working in activism. It is during Faith's brief jaunt in Las Vegas that she meets the flirtatious Emmett Shrader, who eventually funds Loci.

Back in present time, Greer is persuaded to deliver the keynote speech at Loci’s next function, alongside Lupe Izurieta, a sex trafficking victim rescued as a result of Loci's latest initiative and placed in a subsequent mentorship program, goes better than Greer could have imagined.

Once Greer is back in New York she is informed that the mentorship program was a hoax. Greer informs Faith of this betrayal, and while she is disappointed, she chooses to continue working with ShraderCapital as though nothing has changed. Greer feels that this compromises her sense of integrity and ultimately quits Loci.

"Outside Voices" makes reference to the general theme of the novel, conceived in the bathroom at Ryland during the exchange between Faith and Greer, and ultimately culminating in the best-selling novel later written by Greer. This final section of the novel opens with a focus on Zee.

Zee is living with Noelle in their own apartment in Chicago and working as a well-reputed traumatologist when Greer pays her a visit after quitting Loci. In telling her about how everything unfolded at the foundation, she also tells Zee about her betrayal. She is obviously upset, and their visit is cut short as Greer returns to Mascopee. In running into Cory, she learns that he is still living at home, tending to his mother and cleaning houses, but that his video game inspired by Alby is coming together. While Greer still seems to look down upon the way that he has chosen to live his life, her mother comments on how his choices and his actions actually lend to a form of feminism.

While attending a play in New York, Cory spends a weekend at Greer’s apartment. This is the first step toward their reunion, as in the following chapter they are now married and have a daughter together. Zee and Noelle are also married, and Zee and Greer have mended their relationship.

The final chapter of Wolitzer's novel opens onto a get-together celebrating Greer's novel, "Outside Voices". Her life is complete. She has a wonderful life with Cory and she has found a platform upon which to use her outside voice and speak to female empowerment. Greer closes the chapter contemplating the nature of power, and how it transcends. She reflects on how she has replaced Faith, as she will one day also be replaced.

More summaries and resources for teaching or studying The Female Persuasion.