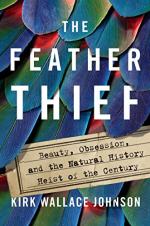 Kirk Wallace Johnson
This Study Guide consists of approximately 51 pages of chapter summaries, quotes, character analysis, themes, and more - everything you need to sharpen your knowledge of The Feather Thief.

The following version of the book was used to create this study guide: Johnson, Kirk Wallace. The Feather Thief. Viking, 2018. 1st Hardcover Edition.

On a June evening in 2009, 20-year-old Edwin Rist breaks into the British Natural History Museum at Tring and steals hundreds of dead bird skins from some of the most colorful and iridescent species in the collection. After hearing about this strange heist, author Kirk Johnson becomes obsessed with getting to the bottom of the story and solving some of the crime’s remaining mysteries.

Part One of the book focuses on some of the history in the relationship between humans and the natural world. In particular, it focuses on the Victorian era when natural specimen collection for both scientific research and personal collections was in vogue. Johnson writes about Victorian-era naturalist Alfred Russel Wallace’s expeditions and specimen collection; many of his collected species would later end up in the Tring heist. Wallace’s story also emphasizes how Victorian-era natural history collection was essential to the scientific development of biology and evolutionary theory at the time. In addition, Wallace’s 100-year-old specimens will also provide knowledge to the scientists of the future by acting as relics and records of centuries past.

While naturalists like Wallace were collecting specimens for scientific purposes, other Victorians, like Lionel Walter Rothschild, were doing so for the prestige and status of amassing personal natural history collections. At the same time, there was a growing market for exotic birds and their feathers in particular for use in women’s fashion and in men’s fly-fishing. As the Victorian-era waned and the consequences of humanity’s unchecked consumption and use of natural resources and cruel treatment of animals became clear, legislation and strict laws began to be passed to protect the world’s endangered species. Despite a shift in both legal and moral attitudes after the Victorian era, a hunger for exotic bird feathers from many protected species remained strong in the subculture of Victorian-era salmon fly-tiers, a community in which Edwin Rist was an active and enthusiastic participant.

Part Two opens in London, England where Edwin has moved from the United States in order to attend the Royal Academy of Music. This section focuses primarily on the events and aftermath of the Tring heist itself. Unable to bring his collection of fly-tying feathers over the border and keen for both prestige among the fly-tying community and financial gain, he plans to steal the Tring’s most beautiful specimens, having heard about the collection from a fellow fly-tier. On the night of the heist, Edwin makes off with almost 300 specimens without getting caught. However, he left a broken window, a glass cutter, and a drop of blood behind.

It takes the curators of the Tring almost a month to realize anything is missing, as no one had any idea that the birds Edwin had taken were valuable enough for someone to steal. When they finally realize that only colorful specimens have been stolen, a police investigation is opened. The museum curators are not very hopeful as the birds need to be returned intact with their identifying tags in order to be of any scientific value, and they suspect the thief will have already removed the tags connecting the stolen goods to the museum. Edwin, meanwhile, is already at work selling skins and feathers online, taking no care to conceal his identity but inventing stories about where and how he got the birds. For almost a year, the investigation turns up no reliable leads until, in May 2010, a law enforcement officer and casual fly-tier spots a suspicious looking bird at a fly-tying convention and hears it connected to the name “Edwin Rist.” He gets in touch with the Tring police who are then able to collect enough evidence to connect Edwin with the crime, search his apartment, and place him under arrest.

Edwin cooperates, confesses, and insists he acted alone before pleading guilty. His lawyer characterizes his crime as a spur-of-the-moment mistake and presents a mental health defense for which Edwin must undergo a psychological evaluation. This evaluation results in him being diagnosed with Asperger’s syndrome. According to the diagnostician, the condition causes over-obsession and prevents the individuals from conforming to social norms, thus making them vulnerable to getting into legal trouble and making poor decisions. Based on a legal precedent also involving a case where the defendant was diagnosed with Aspergers, the judge in Edwin’s case sentences him to a twelve-month suspension: as long as he does not commit any other crimes in that period, he will not go to jail. He is also ordered to pay a fine, but the author notes that the fine is a fraction of what the stolen birds are worth. As the legal case draws to a close, there are still many stolen bird skins missing and unaccounted for.

Part Three focuses on author Kirk Johnson’s attempts to find the rest of the stolen bird skins. He travels all over to talk to the Tring curators and tries to track down people who are known to have bought birds from Edwin. Some prove that they have already returned their skins to the museum, while another feels no responsibility to do so. Although many in the fly-tying community are keen not to be associated with Edwin and any illegal animal poaching or trafficking, others question the severity of Edwin’s crime and blame the Tring for not keeping proper track of its inventory. In discussion with the Tring curators, Johnson learns the true impact of what has been lost to science and collective knowledge, both present and future, by the theft and destruction of these birds.

In his research, Johnson begins to suspect that Edwin had an accomplice, another young man named Long Nguyen. After three years without a response, Edwin also finally agrees to be interviewed by Johnson. In the interview, Edwin minimizes the lasting impact of his crime by quoting inaccurate science and does not seem particularly remorseful. Johnson questions the validity of the Asperger’s diagnosis. Next, he travels to Norway to interview Long who eventually admits to having sold feathers for Edwin and handled financial transactions on his behalf. In contrast to Edwin, Long seems deeply ashamed and remorseful, though he claims not to have known where the birds were from at the time and also admits to still having some Tring feathers in his possession.

Back at home, Johnson feels his investigation is slowing as he comes to terms with the reality that by now, the birds are almost certainly separated from their tags and have no use to science. He notes that since Edwin’s trial, Aspergers is no longer considered a stand-alone condition, in part because of the subjectiveness of the diagnostic process. A last attempt to track down some Tring birds leads Johnson to eBay where is finds that the sale and trafficking of protected species continues largely unimpeded. He pleads to members of the fly-tying community to help him recover the missing skins, but they want nothing to do with him or the heist. Johnson finally has to admit that his quest is over as the museum has "no reason to pursue scientifically useless feathers" (246). Though the feather underground continues to thrive, Long tells Johnson that he is "planning to launch a movement called Sustainable Fly-tying" and in 2016, he mails his remaining collection of stolen feathers back to the Tring (246).

More summaries and resources for teaching or studying The Feather Thief.