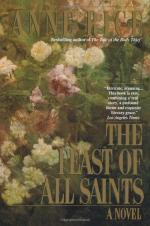 The Feast of All Saints Summary & Study Guide

Anne Rice
This Study Guide consists of approximately 53 pages of chapter summaries, quotes, character analysis, themes, and more - everything you need to sharpen your knowledge of The Feast of All Saints.

The Feast of All Saints Summary & Study Guide Description

The Feast of All Saints Summary & Study Guide includes comprehensive information and analysis to help you understand the book. This study guide contains the following sections:

This detailed literature summary also contains Topics for Discussion and a Free Quiz on The Feast of All Saints by Anne Rice.

"The Feast of All Saints" by Anne Rice is a tale of the New Orleans community of free men of color living within the laws of the white men that surround them. Each of the characters in this tale encounter moments where they must accept that they have not the same rights as the white men and yet, they must uphold the privileges that they have created for themselves within this area. Much of the tale revolves around a custom in the area called plaisage, where a young woman of color would enter into an arrangement with a white gentleman. He would provide for her as well as protect her and her children. "The Feast of All Saints" is a fascinating novel that demonstrates the racist atmosphere that permeates America's environs.

Marcel Ste. Marie is a child born to a mullato woman and a rich plantation owner. Marcel is a boy of privilege and a free man, but he is not accepted into either world in which he is born. He was not given his father's name nor will he ever be able to vote, visit his father at his home, or marry beneath his status. Marcel is often envious of the freed slaves as they create with their hands, like Jean Jacques, but he is unable to dirty his own hands due to his station. Marcel often longs to travel to Paris, where he has been told that the color of one's skin does not keep a man from being the man that he chooses. The appeal of Paris is the freedom that he truly seeks. However, he is thrown into a world between worlds while he awaits his eighteenth birthday in order to accomplish his dream.

Christophe is a famous writer that has traveled to Paris and has returned to New Orleans to teach the young men of color from his home. He feels that he needs to better the place in which he was raised, yet he often finds that the freedom that he was afforded in Paris no longer exists for him, and he has trouble in trying to fight the system from within when many of the victims of this system have come to quietly accept their way of life.

Throughout this tale, there is also the sister of Marcel, Marie Ste. Marie, who was born with such pale skin that she is often mistaken for white. She is supposedly what all the women in the area hope that their children to look like but she is often shunned for beauty. Even her mother is jealous of her. Yet, Marie hates the arrangements that these women make, trying to be what they are not and trying to create children like her who have no secure place in the world. She wishes to marry a colored man and is thought lowly for this choice. Eventually, Marie is raped due to the jealously of others, making her ruined for any white man. However, since a white man raped her, she has no right to accuse him, and it is her father's brother-in-law who must defend her honor as it is illegal for a colored man to duel a white man. Even in doing so, he must duel based on her worth and not her honor. However, he is also conflicted on this decision as he was raised with the notion of slaves and has fallen in love with a young colored woman who has given birth to his son as well. He must face the responsibilities of his actions in bringing another innocent yet misplaced soul into creation.

More summaries and resources for teaching or studying The Feast of All Saints.

The Feast of All Saints from BookRags. (c)2022 BookRags, Inc. All rights reserved.