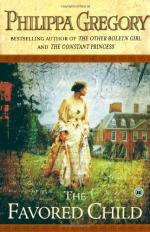 Philippa Gregory
This Study Guide consists of approximately 44 pages of chapter summaries, quotes, character analysis, themes, and more - everything you need to sharpen your knowledge of The Favored Child.

This detailed literature summary also contains Topics for Discussion and a Free Quiz on The Favored Child by Philippa Gregory.

Julia Lacey and Richard McAdams are raised as cousins by Julia's mother, Celia. Richard's father, John, is away attempting to make enough money to sustain their household and to rebuild Wildeacre, the family estate. As the plot unfolds, Julia and Richard will learn that they are brother and sister, born of Beatrice Lacey McAdams and her brother, Harry. As they grow up together under the care of Celia, Julia and Richard know nothing of the family secrets other than the fact that it was Beatrice's greed that prompted the villagers to burn her house and kill her, and that the night of violence caused the death of Harry Lacey, squire of Wildacre. They live in the dower's house with Celia, knowing only that she is Julia's mother and Richard's "mother-aunt," and that they are cousins. With that knowledge, they plan to marry. Though Celia tells them it's not possible, they believe her objection is made because both children will need to marry well in order to bring money onto the estate.

All during their childhood, Richard goes into the village for lessons with the village priest though there's not enough money for Julia to also have lessons. Instead, she begins spending her time with the children of the village, grudgingly earning their respect with her tough nature, her willingness to join them for games and obvious love for Wideacre. That love grows, and it's Julia who has the gift for knowing how to farm and to care for the animals of the estate. Richard cares nothing for the land and is fearful of animals. In fact, the animals are the first to recognize that something isn't right about him.

John returns home with plenty of money to do the necessary repairs and to buy what's needed to make the estate a farming community again. He hatches a scheme in which the people will share in the wealth. The first season begins with the people looking forward to prosperity.

From the time of her childhood, Julia is plagued by dreams. One night, she dreams that lightning sticks the church spire, dropping part of the building onto the nearby houses and causing a fire that quickly spreads throughout the village, killing several. She warns the villagers, and the lightning does strike. It's immediately assumed by the villagers that Julia has "The Sight," but her mother and John - fearing that she's "odd" because her parents were siblings - sends her to a psychiatrist in Bath. While there, she meets a man she plans to marry, but Richard interferes and drives him away. Meanwhile, Richard rapes Julia, and she quickly discovers that she's pregnant. They slip away and marry, only then telling John and Celia and discovering that they are actually siblings.

Julia has a strange connection with her biological mother, Beatrice. She often dreams of Wideacre before it was burned, though that happened when Julia was only two-years-old. In those dreams, she sometimes sees herself in a mirror, but it's the reflection of Beatrice. The older people of the village also recognize her as looking like Beatrice and predict that either she or Richard with be "The Favored Child" who has The Sight, as Beatrice did. As it happens, it's Julia. She often "dreams true," meaning she has dreams that predict what will happen.

After Julia and Richard reveal their marriage, John and Celia head to London to have it annulled. Richard is unwilling. He and Julia jointly inherit Wideacre, and he wants no competition in the form of a husband for Julia. Richard follows John and Celia and murders them, along with their driver. He then forces Julia to live with him in anticipation of the birth of their child. Julia does remain, though she leaves the house the moment the child is born with the intention of drowning it in the river, ending the Lacy legacy forever. Instead, she follows an apparition across the river and discovers a band of gypsies, waiting in their wagons. She wordlessly hands the baby to a woman who is already nursing an infant, and the gypsies leave. When Julia returns home, her friend and mentor, Ralph Megson, has a knife to Richard's throat. Julia instructs Ralph to "kill him."

As Julia lies dying from her exposure to the elements after the birth of her child, she writes James Fontescue. He's the man she was engaged to marry. She asks him to find her daughter, returning her to the estate now that Richard is gone.

More summaries and resources for teaching or studying The Favored Child.