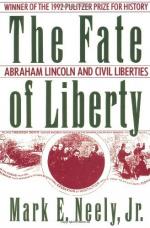 Mark E. Neely, Jr.
This Study Guide consists of approximately 48 pages of chapter summaries, quotes, character analysis, themes, and more - everything you need to sharpen your knowledge of The Fate of Liberty.

The Fate of Liberty Summary & Study Guide includes comprehensive information and analysis to help you understand the book. This study guide contains the following sections:

This detailed literature summary also contains Topics for Discussion and a Free Quiz on The Fate of Liberty by Mark E. Neely, Jr..

The Fate of Liberty examines how Abraham Lincoln, his administration, and the military understand, practice, and justify the suspension of the writ of habeas corpus and imposition of martial law during the Civil War. It concludes the practices are expedient in the context and provide no precedents for the future, should a similar crisis arise.

Lincoln is inaugurated Mar. 4, 1861. He is ill prepared to hold the union together, and advised that martial law cannot be applied to civilians and Congress alone can suspend the writ of habeas corpus. Maryland rioters cutting rail lines to Washington and legislators debating secession prompt Lincoln to suspend the writ locally as a practical military consideration, not a political measure. His authority challenged by Chief Justice Taney in Merryman, Lincoln tells Congress he exercises war powers sparingly, by popular demand, and for the public good. Historians vilify Seward for aggressiveness and efficiency, but in fact, his State Department is passive, baffled and inefficient. With few disloyal persons in reach, many detainees are sailors under the British flag and residents of the Border States.

In loyal Missouri, General Halleck institutes trials by military commission, structured to restrain summary justice and protect defendants' rights through strict procedures, with capital sentences going to the President. On Aug. 8, 1862, Lincoln expands his policies nationwide to enforce the Militia Act, a de facto national draft, and uncoordinated arrests sweep the North as minor functionaries determine loyalty. When the quotas are met strict enforcement ends. Stanton proves a tougher and more efficient administrator than Seward. A military commission imprisons Ex-Congressman Vallandigham, causing widespread Democratic protests that impel Lincoln to explain his policy in the Corning letter. Congress passes the Habeas Corpus Act and the Enrollment Act, and New York City erupts in violence over the draft. In a new order, Seward cites the Habeas Corpus Act alongside the Constitution as permitting the president to allow military, naval, and civil officers to suspend the writ for the duration specifically for POWs, spies, aiders and abettors, draft resisters, and deserters.

The tempo of arrests increases in Union-controlled parts of Virginia, as residents resume normal life and fall afoul of restrictions on blockade running, smuggling, and carrying contraband goods. The Confederacy by conscription makes every Southern male a "proto-combatant," and General Grant orders scorched earth and round ups in the most bitterly disloyal areas, but looks forward to smoothing reconstruction through gentle treatment when feasible. Confederate deserters are administered oaths of loyalty and released as a means of lessening the risk to the Union Army. Expediency expands the scope of Lincoln's policy, as in forbidding the sale of alcoholic beverages to soldiers and fighting government corruption.

The "Great Speech" of the 1864 campaign, claims "War does not extinguish liberty," and contrasts Lincoln with Washington, who never suspends habeas corpus. How dark the blot of military arrests of civilians is on the Lincoln administration depends largely on their quantity, but scholars are unable to determine this satisfactorily. When President Johnson declares the war over, he leaves unclear whether habeas corpus is restored. Milligan is announced but not published until December, and the Army ends military commissions "where justice can be attained through the medium of civil authority" - not the same formulation as Milligan. The first Reconstruction Act empowers commanders to deal with matters civil courts might mishandle. When the last state is readmitted, military commissions end, and Milligan is virtually forgotten. Determined to win the war, Lincoln allows for "necessity" in dealing with the constitution. Were a situation to arise like the Civil War and the writ of habeas corpus needed to be suspended, it is doubtful the legal situation could be defined any better than in 1861. The Civil War provides no neat precedents, ground rules, or map.

More summaries and resources for teaching or studying The Fate of Liberty.

The Fate of Liberty from BookRags. (c)2022 BookRags, Inc. All rights reserved.