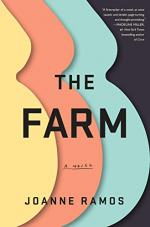 Get The Farm from Amazon.com
View the Study Pack
Study Guide
Order our The Farm Study Guide

Ramos, Joanne
This Study Guide consists of approximately 62 pages of chapter summaries, quotes, character analysis, themes, and more - everything you need to sharpen your knowledge of The Farm.

The Farm Summary & Study Guide includes comprehensive information and analysis to help you understand the book. This study guide contains the following sections:

This detailed literature summary also contains Quotes and a Free Quiz on The Farm by Ramos, Joanne.

This guide was made with the following version of this book: Ramos, Joanne. The Farm. New York: Random House, 2019.

Jane, a young immigrant and single mother from the Philippines, is struggling to raise her daughter and make ends meet. She stays in a Queens dormitory filled with Filipino female immigrants who work domestic jobs, all the while leaning on her older cousin Evelyn "Ate" Arroyo. Ate is a renowned baby nurse for wealthy families, having developed a reputation and strong relationships over the years. When she collapses from exhaustion, Ate convinces Jane to take work at the Carters to take care of their baby Henry. Jane does her job well, earning enough money to potentially work towards a deposit for an apartment. However, she is fired when she is discovered to be breastfeeding Henry Carter herself. Jane is then convinced by Ate to become a surrogate mother at Golden Oaks, a surrogate resort catering to a wealthy clientele.

Mae Yu, a half-Chinese, half-white manager at Golden Oaks, becomes responsible for bringing in more and more Hosts such as Jane. Mae is trying to succeed a more luxurious clientele to sustain success, focusing on targeting Madame Deng, the only female Chinese billionaire. Mae also succeeds in bringing in Reagan McCarthy, an upper-middle class white art graduate who is a departure from the regular collection of Hosts with immigrant backgrounds. Reagan is designated a Premium Host because of her background, and is housed in the same room as Jane. Though Jane is initially reluctant to engage with Reagan because of Ate's advice, she eventually opens up to her and Lisa, the vivacious Host going through her third pregnancy at Golden Oaks. Lisa charms Jane by paying her attention, taking her on a trip through the forest. There, Lisa has Jane serve as a lookout while she has sex with her boyfriend, Troy. Jane is upset at the lie but covers for Lisa, even though she is reprimanded for being bitten by a tick, as that could have harmed the baby. The incident results in the cancellation of a visit by Amalia, Jane's daughter.

Meanwhile, Ate, too old to work as a baby nurse, tries to start a catering business serving Filipino food. It is revealed that she left her children in the Philippines and hopes to return some day, particularly for her son Roy, who was permanently disabled in a boating accident. Working out of the dormitory, Ate meets Segundina, another Filipino immigrant and promises to help her find work. Meanwhile, Reagan feels misgivings about receiving her bonus after having learned of Jane's hardships. She tries to transfer her bonus to Jane, but Mae intervenes. Mae arranges for Reagan to meet her Client, Callie, an African immigrant who is single and has become quite successful later. Callie and Reagan hit it off and Reagan begins to feel better about her pregnancy. At this time, Jane begins to have difficulties reaching Ate. In a chance encounter, she meets Segundina at Golden Oaks, who inadvertently reveals that she would babysit Amalia while Ate was working. This upsets Jane, who confronts Ate over their video call. Ate then contacts Mae and informs her that Segundina has spoken too much, revealing herself to be a Scout for Golden Oaks.

Jane becomes more and more distressed after this incident, worried about Amalia's health. Though she continues to receive videos of Amalia, Ate does not return her calls. One day, Jane calls her apartment phone and finds herself talking to Angel, Ate's friend. Angel does not reveal anything about Ate or Amalia and eventually hangs up on Jane. Meanwhile, Jane encounters Lisa engaging in oral sex with a Golden Oaks employee, Jose, and informs the authorities, earning her good will. However, the good will still does not result in a meeting with Amalia, further upsetting Jane. Before Lisa leaves for her delivery, she is able to find out that Reagan's Client is actually a Stand-In, not the real person, and that Ate is a Scout for Golden Oaks. Reagan covertly communicates with Lisa and begins to plan for Jane's escape so she can meet Amalia. While on an outing with Callie, Reagan creates a distraction that allows Jane to escape, who is able to reach the hospital where Callie is with Troy's help. There, she discovers that it is Ate who is in the hospital, and Jane learns the truth regarding the lack of communication.

Mae begins to deal with the crisis, divulging to the reader that Madame Deng has multiple hosts at Golden Oaks, including both Reagan and Jane, and her investment is in danger because of the incident. Mae is able to reach Ate's apartment before Jane, and when the latter arrives, Mae confronts her. Mae tells her that her bonus will be revoked upon delivery, but Jane is resolute and unapologetic for her actions to see her daughter. Two and half years later, Reagan has used the money for Golden Oaks to purchase an apartment in Williamsburg, Brooklyn, and has also paid for her MFA in photography. Meanwhile, Jane is employed by Mae and her husband Ethan in Westchester, initially as surrogate and then as a nanny. Jane and Amalia are given an apartment over Mae's garage, and Amalia goes to a local school with help from Mae. Though Mae is fond of the precocious Amalia, she begins to wonder a life where she takes care of her family, even considering becoming pregnant herself. Jane, aware of the tenuous nature of her situation, begins to plan for an alternate future with Amalia.

More summaries and resources for teaching or studying The Farm.

The Farm from BookRags. (c)2022 BookRags, Inc. All rights reserved.