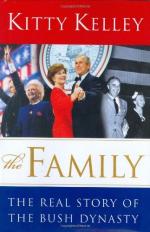 Kitty Kelley
This Study Guide consists of approximately 40 pages of chapter summaries, quotes, character analysis, themes, and more - everything you need to sharpen your knowledge of The Family.

The Family Summary & Study Guide includes comprehensive information and analysis to help you understand the book. This study guide contains the following sections:

This detailed literature summary also contains Topics for Discussion on The Family by Kitty Kelley.

Tracing the history of the Bush-Walker clan that produces two presidents, George H. W. Bush and George W. Bush, this book follows the famous family from their origins in Connecticut to their more modern homes in Maine, Texas, and Florida. Including many of the little-known family members as well as the political heavy hitters, Kelley exposes many of the family secrets, delves into the past to recreate events and people who have been made over for political purposes, and show the Bush family that lies behind the picture of the perfect family that is often presented to the outside world. Chronicling a line of privilege and wealth, the book balances the public portrayal of the Bushes with their real life struggles and sorrows.

The Bush political legacy begins with Prescott Bush. He is the father of George H.W. Bush and the grandfather of George W. Bush. He grows up in a home of wealth and privilege and attends the best boys schools in the United States. He attends Yale and establishes a family tradition of attending this University. Like his progeny, he is not a great scholar, but instead thrives in athletics and socializing. He carries a positive memory of Yale throughout the rest of his adult life and seeks to instill these same values in the later generations of his family. As an adult, he becomes very influential in banking in New York City and the surrounding suburbs. As he grows older, he transitions from business to politics and becomes a respected senator from Connecticut. In his position in the Senate, he works from many of the social values that he holds dear and takes many stands based on the principles he believes in, including voting against his party in condemning Senator McCarthy's communist witch hunts.

George Herbert Walker Bush, the second son of Prescott Bush, is eager to follow his father's footsteps into the political arena. After serving in World War II as a fighter pilot, he marries Barbara Pierce and attends Yale just as his father did. The couple moves to Texas to establish a fortune in the oil industry. Through family connections, George H.W. Bush succeeds in building a successful oil company with which to launch his political ambitions. He runs several unsuccessful campaigns in Texas before joining the administrations of Nixon and Gerald Ford. With each new position, be it Ambassador to the United Nations, Ambassador to China, or Director of the CIA, George positions himself to run as the vice presidential or presidential candidate for the Republican Party. He finally succeeds in getting on the ticket with Ronald Reagan, though the two men strongly dislike each other. His vice presidential role carries over into a nomination for president, which is successful for one term.

George W. Bush and Jeb Bush are the two oldest sons of George H.W. Bush. While George flounders in school and business, Jeb takes up the family traditions and is considered the best hope for a continuation of the Bush family political legacy. George, however, outdoes his brother in becoming first governor of Texas and then the president of the United States. George's long road to the presidency is marked with personal problems and business failures resulting in the surprising upset of both family and national expectations when he is elected to the country's highest office.

More summaries and resources for teaching or studying The Family.

The Family from BookRags. (c)2022 BookRags, Inc. All rights reserved.