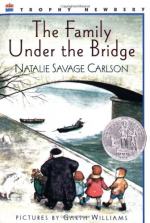 The Family Under the Bridge Summary & Study Guide

The Family Under the Bridge Summary & Study Guide Description

The Family Under the Bridge Summary & Study Guide includes comprehensive information and analysis to help you understand the book. This study guide contains the following sections:

This detailed literature summary also contains Quotes and a Free Quiz on The Family Under the Bridge by Natalie Savage Carlson.

Armand is a Paris hobo who lives under a bridge. He wanders the streets and chats with his gypsy friend Mireli. She tells him that he is about to have an adventure. Mireli tells him where gypsies have set up their camp and invites him to stay, but he declines. The prospect of an adventure appeals to him and he goes on about his day looking forward to whatever it might bring.

He wants the city until it’s time for dinner. He spends two hours outside of a restaurant enjoying the smells wafting from inside. Armand returns to the bridge for the night and finds three children and a dog using his space under the bridge as their shelter. He doesn’t care for children and tells them that they can’t stay. Suzy, the eldest child, tries to compromise. She draws a rectangle on the concrete, giving Armand his own room. Evelyne and Paul, the other children, and Jojo, the dog, want Armand to stay.

Madame Calcet, the children’s mother, returns from work and is angry to find Armand with her children. She doesn’t want a hobo around her children. The children tell her that he’s harmless. Meanwhile, Armand steels his heart against their kindness. He doesn’t want to get close to anyone, but he does decide to stay in his designated rectangle.

The next morning, Madame Calcet goes to work at the laundromat and Armand prepares for his day. He reluctantly takes the children with him after they beg. They all set out for their adventure. He takes them to the Louvre Shop to see Father Christmas and the children ask Father Christmas for a new house because they lost theirs after their father died. Armand gets the children to sing carols and people begin to give them money. With the money, Armand buys them all pancakes and chestnuts. He even gets enough pancakes for Jojo to have some.

Madame Calcet is upset when she learns that Armand has taught her children how to beg. The next day, while she’s at work, the children encounter two women who want to report them to the authorities. Armand overhears the women talking about the children and he whisks them away to hide with the gypsies. He introduces them to Mireli, Nikki, and Tinka, a gypsy close to Suzy’s age. The gypsies take them in and teach them about their community. Paul befriends some of the gypsy boys and they teach him how to repair shoes.

Tinka explains to Suzy about how they don’t go to school and Suzy tells her that she will teach her how to read and write. After seeing a trailer in the gypsy camp, the children decide they want a house on wheels for Christmas and ask Armand to tell Father Christmas about the house and where they’re now staying.

For Christmas, the gypsies arrange for them to have a Christmas tree. Nikki chopped down a tree from the Jardin des Plantes and they decorated it for their new friends. A policeman arrives looking for Nikki and Mireli tells him that he’s left town. Soon after, the gypsies pull up camp and head out. It appears that Paul has left with them, but he returns after going and trying to get a job. Armand learns about a job as a night watchman from a friend and decides to take it. The job turns out to be a caretaker and the job comes with an apartment. Armand and his new family have found a place to live.